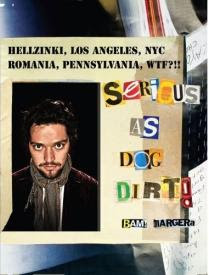 “Bam Margera: Serious As Dog Dirt”
Pocket Books/MTV Books
http://www.bammargera.com/
Professional skateboarder, television and movie star, radio host and all around madman - suffice to say, Bam Margera has done a lot thus far in his life. Well, with “Bam Margera: Serious as Dog Dirt,” now you can add author to that list. It probably wouldn’t have been hard to predict that the star of CKY/Jackass/Viva La Bam couldn’t stay away from putting a book together for long.
Speaking of, this book is disorganized and mostly disjointed, much like the man who put it all together. It chronicles memories and moments from Bam’s life, so shouldn’t we anticipate a disheveled and disorderly work? Hell, this is Bam Margera we are talking about here. It should be expected.
“Bam Margera: Serious As Dog Dirt” is a brilliant look into the life, mind and psyche of an eclectic pop culture figure, although we could probably do without the multiple photos of Bam’s best friend Chris Novak’s naked ass. It touches on everything Bam has ever had his hands into – CKY, Haggard, Minghangs, Jackass, Viva La Bam, Bam’s Unholy Union - as well as his relationships with bands like H.I.M. and the 69Eyes. The photos of Margera’s daily calendars are interesting, if not neurotic, due to the fact that they are almost shortform running journal entries as he detailed everything he did that particular day. The book also houses some killer priceless photos you surely aren’t going to see anywhere else. Come for those, but stay for stories about Raab and Bam in high school, as well as Jackass skits that made the TV show and movies, and those that didn’t. As would be expected, Bam dedicates a chunk of the book to his wife Missy, with random writings and tons of pictures – solid evidence that Bam has a good heart.
Bam has cats named Mousebreath and Trouble, which you’ll find out along the way. You’ll see Bam’s tattoos, both the before and after products, at which point famed tattoo artist Kat Von D makes an appearance. Follow along as Bam and his crew head to Europe to find Santa Claus (if you haven’t seen Bam’s movie “Where the F*** Is Santa” DVD, do it now).
He takes us through his adventures at the Donnington Festival in 2009 as well as the 2009 Golden Gods Awards. “Bam Margera: Serious As Dog Dirt” also takes us all along through China as well, both with photographs and haggard ass stories strewn about here and there, complete with this quote from the Metal Hammer Awards – “Novak is blacked out drunk with his ass hanging out insisting that a 40-year-old give up her panties so his d*** and ass wont hang out anymore.” That about says it, doesn’t it?
Keep this in mind, when you open “Bam Margera: Serious as Dog Dirt” you better be prepared for a fanatical and incoherent, yet passionate ride, full of the intricate and wandering ramblings of a very eccentric figure. Be sure to buckle up – it’s going to be a wild ride, especially if Bam is driving.
Email Post