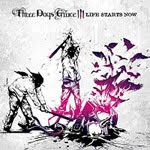 These guys earn a paycheck doing one thing – writing uber-accessible rock tracks fit for mass consumption. They didn’t forget how to do that on this record, their latest, ‘Life Starts Now.’ This is the type of record you’d expect Three Days Grace to release – one full of giant rock anthems that will go over great on their next arena tour.

For a band like Three Days Grace dropping an album like this, the word mature could be considered a true buzzword to describe it, but that’s what this record is – mature. They aren’t just bitching about how bad life is and their childhood was anymore. Hell, there is even a love song on this record (‘Lost in You’). Yes, a love song. ‘Life Starts Now’ has its unnecessary Nickelback-esque moments (‘The Good Life’). As far as this song goes, last time we checked, you have the good life. You don’t see all of us up on stage rocking with pyro night in and night out, do you? Leave it to a rockstar to bitch about wanting more. And if ‘Goin’ Down’ doesn’t just scream Chad Kroeger, then nothing should.

While ‘Life Starts Now’ isn’t without its air of mediocrity, and while some moments tend to sound too generic for the bands own good, it isn’t doesn’t lack the traditional Three Days Grace lure and overall panache. It chugs its way through 12 efficient tracks rather agilely, kicking things off impressively with the derisive ‘Bitter Taste.’ The band manages to leaves things on a high note with the title track closing things out, and prepare yourself for a great ride with ‘Life Starts Now,’ one that will feature driving guitar crunches, solos, massive hooks, memorable vocals, breakdowns and all things considered to be ‘old hat’ for these guys, with a few new tricks sprinkled in here and there.

A new record from Three Days Grace would immediately enter into Rock Album of the Year discussions based on name alone (c’mon now, this is Three Days Grace), and with ‘Life Starts Now,’ the Canadian trio didn’t do anything to kill those talks just yet. This record is brimming with believable emotionality, and has definite heart. Yes, these guys may be one of the worlds biggest rock acts but they aren’t letting that affect their songwriting, at least not yet anyway. ‘Life Starts Now’ isn’t as processed as one would think. These guys aren’t Buckcherry and they sure as hell are not Hinder, as much as this record might be a harbinger of things to come. But that is the future, and this is now.