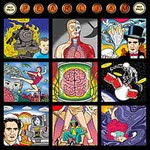 Pearl Jam is a band that should need no introduction, well; at least you would think so. Their ninth studio album to date, and first self release through their very own Monkeywrench Records, ‘Backspacer’ finds the boys reverting back to something they haven’t done in what seems like a decade and a half (oh wait, it really has been that long), that being having fun musically.

Using the phrase ‘having fun musically’ in a review of a Pearl Jam record will probably alarm some hardcore (or way too serious) PJ fans up in arms and send them running for the closest copy of ‘Ten’ or ‘Yield,’ but rest assured, PJ having fun again isn’t a bad thing. Sure, ‘Backspacer’ might come off a bit too trivial to some and yes, it definitely has its shallow moments, but hey, it is what it is. This is still Pearl Jam. It’s still Eddie Vedder behind the microphone and Stone Gossard on guitar – not much has changed, if anything. OK, so the next ‘Jeremy’ isn’t on this record and a track like ‘Daughter’ might not be in sight, but the musical content of ‘Backspacer’ isn’t all bad and is certainly far from disposable.

We all know Barack Obama is in office right now. Maybe Vedder doesn’t have much to complain about anymore? While it walks the positive side of the tracks more often than not, ‘Backspacer’ still deals with a variety of heavy subjects, a trait the band is known for. ‘Gonna See My Friend’ and ‘Got Some’ deal with staying off of drugs and (musical) drug dealers, ‘Speed of Sound’ is an expression of Vedder’s love for music, while the solo piece ‘Just Breathe’ might just be the best love song the band have ever penned, if not the only one (even though album closer ‘The End’ is close). Listen, Vedder didn’t all of a sudden forget how to write superb rock songs. So what if the approach is a bit different from what we have become used to? This set of tracks is still built around memorable hooks (in typical PJ form), and sound the tightest the band has in a while, and for the first time in a long time, these guys sound refreshed, energized and thoroughly revived.

Perhaps the most surprising element to ‘Backspacer’ isn’t its airy feel or unexpected pop/new wave feel; it’s the fact that the record wraps in around 37 minutes. Yes, a Pearl Jam record in 37 minutes. The band didn’t waste their time plodding along, trudging from track to track, yet spent their time wisely, honing these songs, trimming down without wasting a second, literally.

Hell, if Vedder and the boys could survive eight years of George Bush in office, then they can survive just about anything.