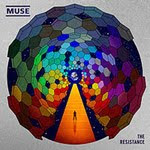 Muse’s latest, ‘The Resistance,’ is brimming with soaring ostentatious melodies that tend that wander on Queen’s side of the tracks more often than not. It sounds epic without even trying, thanks in part to some of the tightest musicianship you will hear in the industry today. They often say that the sum is greater than the whole of its parts, but that isn’t the case with these guys. Muse is brilliant together and is just as brilliant apart.

This record starts off strong with the unrestrained passion of ‘Uprising’ before fading off into the night, just like you’d expect them to. With ‘the Resistance’ Muse is not afraid to experiment with sound in order to see where it takes them. They bring in pianos on ‘I Belong to You,’ and expand things further than they have ever done before with the captivating and enthralling three part Exogenesis Symphony. The near 13 minute overture that concludes ‘The Resistance’ is the bands most brilliant work to date, and shows that these guys have more than a few tricks up their sleeve. The Exogenesis Symphony is full of scenic movements with lush arrangements that work to add a high level of richness to ‘The Resistance.’ Aside from the three parts of the Exogenesis Symphony, ‘the Resistance; really does offer something for everybody. The title track will please fans of classic 60’s-era pop, ‘Undisclosed Desires’ will keep contemporary followers of new wave and dance giddy, while ‘United States of Eurasia/Collateral Damage’ will have you thinking that Freddie Mercury himself helped put pen to parchment.

Overall, ‘the Resistance’ is a blockbuster sounding album from a band that doesn’t seem to release anything but. This is a progressive journey for each and every listener, one that often goes off on nomadic tangents with the listener in tow.

So yeah, all second coming of Queen prognosticators take heed. You’re going to like this one.

Sitting there thinking you know everything there is to know about the band? Well, when Clash Music went delving into the Devon trio’s closet, they were expecting to find some truly strange skeletons, and you won’t believe the results. (http://www.clashmusic.com/feature/12-things-you-never-knew-about-muse).
Email Post

Unknown said…
have a look at this Muse's new album cover in STOP MOTION :)
please rate it and comment if you like
and also spread to others about this video
love music, love muse :)