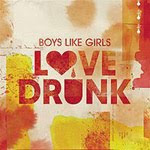 A lot of bands do whatever they can to try and avoid what in the industry is called ‘the sophomore slump,’ as it pertains to bands releasing a second album. It’s hard to think that you could even mention that phrase in the same sentence as Boys Like Girls, seeing as how wildly popular the band’s debut eponymous release was, but there are moments of their second album ‘Love Drunk’ that could lead you to believe they could endure the dreaded afore mentioned slump.

‘Love Drunk’ is about as catchy as you can get, which shouldn’t be a surprise at all when talking about Boys Like Girls. There are some tracks that are way too catchy that they come off as something you’d see a boy band dancing and singing along to. ‘Heart Heart Heartbreak’ sounds way too close for comfort to an N’Sync track.

These guys have always had knack for writing super contagious songs (see ‘Hero/Heroine,’ ‘Thunder,’ ‘The Great Escape’), something the band surely has not forgotten how to do. Most everything off of ‘Love Drunk’ will have you bobbing your head and singing along, which is what the Boston based band has made their living on. While areas of ‘Love Drunk’ may be a little bit too catchy, those special tracks exist that the band has had a proclivity for penning (‘Go,’ ‘Someone Like You’). The band enlisted the services of country music singer Taylor Swift to help with vocals on ‘Two Is Better than One.’

There is a lot to like on ‘Love Drunk,’ that much is for sure. The band still has the ability to channel early the Startling Line (‘Love Drunk,’ ‘Two Is Better than One’), while still maintaining the songwriting that made them the band they are now (‘Chemicals Collide,’ ‘She’s Got a Boyfriend Now’).

So don’t worry scenesters, Boys Like Girls have not changed. If at all possible, they have stayed the same, but with a few tweaks here and there.

Grade: B
Listen to: ‘The Shot Heard Round the World’
Email Post