No Politician Is Safe with These Guys Around: A Conversation with Robbie of Molotov Solution 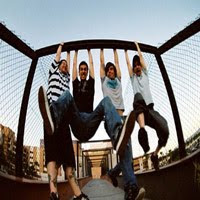 No Politician Is Safe with These Guys Around: A Conversation with Robbie of Molotov Solution
www.myspace.com/molotovsolution

As the band will explain, a harbinger is a foreshadower of the future, and that is what this album is for this band. ‘The Harbinger’ is a record that does nothing short of that, nothing short of foreshadowing the future for this young group of musicians. If this record is the bands jumping off point, then we all better stand up and take notice now, or else we might just be left in the dust when these guys are the talk of the heavy metal community.

Get eXposed: Real quick – you’re from Vegas, the Killers are from Vegas. Any chance you know the guys?
Robbie Pena: Haha, no we've seen the singer around here and there and met them a couple times but that's about it.
GE: Your self-titled disc dropped just last year and now ‘The Harbinger’ streets in 2009. Why only a year between releases?
Pena: ‘The Harbinger’ was our first release on Metal Blade. We had signed not long after the self-titled was released and it was just time to release the sophomore album.
GE: With a name like ‘The Harbinger,’ and knowing your mind for politics, is it safe to correlate the two? Or am I just way out in left field?
Pena: Well a harbinger is a symbol or event that foreshadows future catastrophe and it is safe to correlate them because that's just what we did. The album is trying to forewarn the population of what is coming, in our economy, in our everyday lives, and in our own minds.
GE: A lot of attention is paid to detail on ‘the Harbinger.’ Was that a cause of you just paying more attention in the studio, or was that something you strived for with this release?
Pena: We felt like we put a good amount of time into the writing of the actual record, and we tried to add some elements to the album that we felt would be enough for the message to get across. In the end it's definitely something we're striving for though.
GE: Speaking of attention to detail, since the lyrics are oft-mindful and socially aware, does it take longer to put songs together? Or does that not bother the process?
Pena: Sometimes, because the lyrics and the song have to be on par with each other, but usually just like any song-writer, just find a way. There are just parts that have to be paid more attention to when trying to lay vocals over it.
GE: You brought in Tim Lambesis to handle the production. He made albums like Impending Doom’s ‘The Serpent Servant’ and War of Ages’ ‘Arise and Conquer’ completely own. How did you go about getting him, and what did he bring to the album?
Pena: The studio was pitched to us by Metal Blade, and we worked with Daniel Castleman and Kelly Cairns as well. I agree the album turned out spectacular along with the other projects the studio has taken on. The production ideas brought to us working with Kelly and Daniel were constant and helpful. They are great people.
GE: Not to get too off task here, but if Molotov Solution had the chance to run the country, what would you do? What changes would be made?
Pena: We would make money worthless and make it so we can only use silver and gold, practice isolationism and eliminate secret societies, like the Bilderberg group and CFR. Also, beer would be the same alcohol percentage and price everywhere.
GE: Also, do you think the political structure and the way it is run will ever chance for this country?
Pena: Of course it will change, all great empires fall, maybe it will be overthrown from within, or maybe without. Maybe she'll be destroyed like Rome. History repeats itself and will continue to do so, so we won't be able to continue like this for much longer.
GE: What does Molotov Solution have on tap for the rest of 2009?
Pena: Finishing off this tour, and then heading out on a new tour in September, so hopefully everyone who reads this will be able to see us for the first time or even again later this year!
Check out more from these boys over at www.myspace.com/molotovsolution.
Email Post