28 Years, Eight Albums, Yet ‘Passiondale’ Is the Best Yet: A Conversation with Henri of God Dethroned 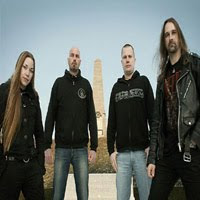 28 Years, Eight Albums, Yet ‘Passiondale’ Is the Best Yet: A Conversation with Henri of God Dethroned
http://www.goddethroned.com/

Sometimes it takes a while to reach the peak. They say practice makes perfect. Well, you don’t have to tell that to God Dethroned’s Henri Sattler. Sure, he may be extremely humble about the success of his bands’ latest, ‘Passiondale,’ but as they say, the proof is in the pudding. ‘Passiondale’ is the bands most triumphant work yet, even though it took them nearly three decades and more than a handful of records to get there.

‘Passiondale’ is an explosion of precise blackened death metal, an album that has critics, and the rest of the industry for that matter, on their ear. It is a proclamation shouted from the rooftops that God Dethroned have not lost their edge and that they have come nowhere near their exclamation point.

When he and the rest of the band were in the studio recording this new album, Sattler and the rest of the guys must have known they were onto something – something big. Shortly after the release of the record, Sattler took the time to listen to me gush about ‘Passiondale,’ and he took it well. Along the way he also filled me on how the recording process went and what influenced it, then I ask the hard question – does Sattler really think this, the bands eighth studio album – is their best yet? Find out for yourself.

Get eXposed: Tell me about the recording process of ‘Passiondale.’
Henri Sattler: ‘Passiondale’ was recorded at the Soundlodge Studios in Germany from mid October 2008 until mid-January 2009. This time we recorded as a three piece, meaning that I was there for three months while the drummer left after the first week and I only saw our bass player for a week in the middle of the recording sessions. It almost felt like recording a solo album. Nevertheless, the recordings went smooth and quick, so we could spend a lot of time on the mix. According to the reviews the result is good as many ‘zines state that this is our best album to date.

GE: What influenced the writing of this record?
Sattler: Mostly the fact that I wanted to go back to the roots of God Dethroned and make an album that would connect with albums such as ‘Grand Grimoire’ and ‘Bloody Blasphemy.’ Also the fact that the drummer who played on those two albums came back to our band helped a lot with that. The new album ‘Passiondale’ is a concept album about World War I and we wrote music that fitted to that concept perfectly well. The First World War, was a harsh a sick war, mostly fought in the trenches. This war also saw the coming of mustard gas and the first use of tanks. So we wrote fast & furious riffs, lots of blast beats, but also the melancholic parts that represent the misery of the war. It’s like listening to the soundtrack of a war movie.

GE: If you were to briefly describe this record to a death metal fan who may have not heard it yet, what would you say?
Sattler: If you’re a fan of Blackened Death Metal, brutal but diverse songs and strong epic melodies then check out ‘Passiondale.’ Some songs can be listened to on our myspace page.

GE: Tell me about your upcoming tour. Are you excited to make the jump overseas and to the US?
Sattler: Yes very much! We’ve played the states a couple of times, but this time the booking agent did a great job by booking the tour far upfront, so there’s enough time to promote it. It will be part of our world tour. We play Europe first, then South America and Mexico. On September 30th the US & Canadian part starts. When we come back to Europe there’s another tour waiting for us there.
But we’re really excited to play the States again. We have a good following overthere and it will be good to see some old friends again too.

GE: You’re going to be performing at some festivals in the coming months. Do you have a preference on the shows you play? Do you like playing bigger festivals as opposed to club shows?
Sattler: We like to play both festivals and club shows. The festivals have a bigger crowd, but the circumstances are not always that easy. The playing time is usually limited and playing club shows gives you the chance to play a longer set and bring the show which you cannot bring to the festivals, unless you’re the headliner of course.

GE: Who will you be out on the road with?
Sattler: The US tour will be with Abigail Williams, label mates Woe of Tyrants and Augury from Canada. They are all good bands and a strong package in my opinion.

GE: How much of the new record will fans get to hear live?
Sattler: We will play around five songs of the new album which leaves us space enough to play songs from all the other albums as well.

GE: After all of the critical praise that ‘Passiondale’ has received, do you think it is your best record to date?
Sattler: Every critic who reviewed it seems to think that. For me it’s also our best album, yes. But when you ask a musician which album is his best then he will always say that his last one is his best. I guess for the person who wrote the songs it’s always difficult to stay objective. Anyway, we are really happy with all the great reviews we get everywhere.

GE: What can we expect from you the rest of the year?
Sattler: As much shows as possible. Soon a video for the song ‘Drowning in Mud,’ but we’re also gonna make a video for ‘Poison Fog’ as well.

Check out all things God Dethroned over at http://www.goddethroned.com/.
Email Post