Your One Way Express Ticket To Hell, And Back: A Conversation With Wil Francis on Aiden 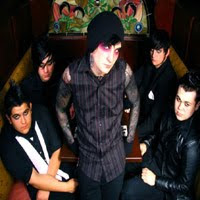 Your One Way Express Ticket To Hell, And Back: A Conversation With Wil Francis on Aiden
www.myspace.com/aiden

With their latest, ‘Knives,’ Aiden was looking to return to the pure energy and raw sound of their debut ‘Our Gangs Dark Oath,’ something that frontman Wil Francis thinks they have gotten away from. Whether or not they succeeded is something better left up to each individual listener, but more are saying yes to that question than no. ‘Knives’ is the bands fourth release to date, and first since Francis set off onto his own with his side project William Control.

‘Knives’ is a staunch return to form for the Seattle punk band, and while out on tour in promotion of it, frontman Francis spent a little bit of his downtime between shows with me to discuss his hatred for in-store performances, how the record came together on the whole and just what the rest of 2009 has in store for the band.

Get eXposed: To promote ‘Knives,’ I see you’re doing a lot of in-store performances. Was that something you wanted to do more of for this record?
Wil Francis: Not really, Im not really a fan of in-stores all that much. I know it is important to get out there and sign stuff for the kids, but I’m not really a fan of playing songs acoustically in a mall. If you want to get out and play a gig, you have to do some things you don’t want to do sometimes.

GE: What’s the deal with the flyer for your last headlining tour? Who came up with the Elvis/Jesus picture?
WF: I did. I really like Elvis and I really hate religion so when I put the two together I loved it because it was pretty offensive, but whatever, its art.

GE: Tell me about ‘Knives.’ How was the recording process of that record?
WF: Being the main songwriter for the band, I wrote about 30 songs for the album and then every time I wrote a song or a couple of them I would take them to the guys to see what they thought and to see if they worked with a full band or not. The recording process itself was pretty fierce. We recorded it at my studio and I produced it myself. We literally set up and recorded 15 full songs in seven or eight days. I wanted to approach it as I was in a band in the 80’s and we had no budget to buy tape or reel or anything like that. Like we’ve got one tape reel and we had one shot to record it from beginning to end and what I wanted to do with that is recreate what we do live. You know, a lot of people come up to me all the time and tell me they love our band live and that when we play we’re so intense and energetic but that the records lack that enthusiasm. I wanted to try and capture what we do live on ‘Knives’ since we have never been able to capture that on record yet. For us, normally, everything is on beat and in tune; it’s so sterile and produced, but on this record this is how we sound live. It was pretty simple and pretty fierce.

GE: Is it easier for you to just produce yourself, or it is easier to bring someone in to do it?
WF: No, I would much rather produce it myself. In a sense where bands get signed to a bigger label, the label wants that band to produce some hits, so they hire producer who is a known hit maker to come in and write with the bands to try and generate revenue for the label. Normally, a producer will come in and change songs around, but that has never been what Aiden has been about. With Victory Records, they are a label that has always never wanted to compromise an artists’ vision by changing anything around on them. That’s what I really love about Victory – they let me going and record records that I would want to listen to. In the past technically we haven’t produced but I have always shown up to the studio with the arrangements and melodies already done. Basically, our producers in the past have been engineers that have gotten a producing credit because back then I was too naive in the music industry. I never sat back and said, what a minute, I pretty much produced this.

GE: What inspired you to write this record?
WF: First off, I wanted this album to be not a cliff note in the book of William Francis; life. I tried to take myself out of the equation. This is probably the most impersonal record I have ever made in a sense that on all of our records in the past I talk things I have experienced, things that have happened to me, things I see or the way I feel, it’s all my personal experience in life. With ‘Knives,’ I wanted to write it as more of a story teller, not William Francis, the guy from Aiden, more William Francis the story writer and filmmaker. I wrote about things I find interesting and things I hate. ‘Crusifiction’ is an anti-Christianity song, and it has that type of theme to it, but it’s actually about a guy named Roman, the brother of Jesus Christ who comes back to Earth to tell people that everyone in the Western World and Christianity who believe that Jesus was the son of God, are idiots and were all duped. Jesus is his brother and that they are the sons of a prostitute and that they were all duped.
GE: Wow, that’s a lot to swallow.
WF: [Laughs] Yeah, all of the songs come from short stories I have written. I’m not only a songwriter but I also write stories and poems, and paint pictures. Im not just a signer in a band; I do a lot of other things that a lot of people just don’t know about.

GE: What can we expect from you the rest of the year?
WF: We’re going to be on Warped Tour all summer, and then in September we are going to Australia, then beyond that I don’t know.

For more information on all things Aiden, head over to www.myspace.com/aiden.
Email Post