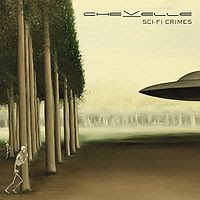 Foreshadowing, by definition, is hinting at things to come, a tool often used in a literary sense when it comes to the analytical deconstruction of a story, but it’s also something that can be used in a musical sense, for say, Chevelle’s newest record ‘Sci-Fi Crimes,’ their fifth studio album to date. By listening to merely the emotionally tempered purity of the opening chug of ‘Sleep Apnea,’ you can foreshadow that this record is going to be a journey – one without many breaks.

You won’t find much disposable material (if any) on this record, as every track demands attention. ‘Jars’ has already proven that it is a surefire hit, but it isn’t the albums brightest spot. ‘Highland’s Apparition’ is an effort to lure you into a false sense of security before the immediate guitar/bass/drum tidal wave of ‘Roswell’s Spell’ engulfs you, crashing down like an angry sea, serving as a subtle reminder of what you’re listening to. ‘Interlewd’ attempts to accomplish what ‘Highland’s Apparition’ couldn’t (put you at ease), before the musical feat that is ‘A New Momentum’ dominates the speakers, boasting some of not only the albums best guitar, but best pure grooves and hooks. The band does their part to save the best for last as ‘This Circus’ is arguably the albums most triumphant work.

Think of ‘Sci-Fi Crimes’ as a track meet; excellent song after excellent song, each jocking for position, and before you know it, the race is over and you’re left satisfied, yet thirsty for more, at which point you should just simply hit the repeat button.