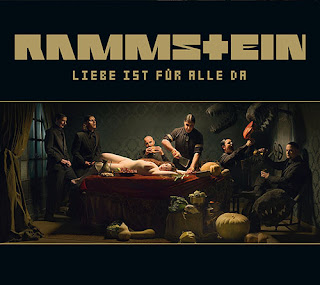 After months of speculation, Rammstein have confirmed the name of their sixth studio album to be LIEBE IST FÜR ALLE DA (U.S. release on Oct. 20 via Universal Music Germany through a marketing and distribution deal with Vagrant Records).

The album art, with painting-like photography created by Eugenio Recuenco, features a multi-panel storyboard incorporating band members in what is sure to carry on the controversy that surrounds Rammstein and their visual imagery.

Commenting on the themes addressed in LIEBE IST FÜR ALLE DA drummer Christoph Schneider said, “The overriding theme, I would say, is extreme forms of love…” Rammstein keyboard player, Flake Lorenz added, “Love can be interpreted in many different ways; for example, sometimes unreciprocated love can lead to tragic situations – mass murders, school shootings, terrible events like that. Hate is the negative form of love, like hot and cold…”
Email Post