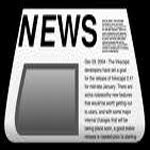 The band is currently finishing up mixing the new record in their hometown of Stockholm. Although Night is the New Day is Katatonia’s eighth album, they still continue to challenge themselves musically, always looking for ways to take their distinct, melancholy sound a step further.

"I realize that I’ve never sung this MUCH on an album before,” explains vocalist Jonas Renkse. “Not that I’m singing ALL THE TIME (don’t worry), but the vocals are much more demanding.” He admits, “My voice was already tired from the studio session, and even more tired from the gigs and I was really worried, but behind the microphone everything fell into place for that one last session.”

The band anticipates the album to be completed the first week of September, and plan to launch a mini-site (http://www.nightisthenewday.com/) soon after with a complete track list, audio samples, and more.

The artwork for Night is the New Day was done by Travis Smith, whom also produced the art for The Great Cold Distance, as well as numerous other Katatonia albums. Following the completion of the album, Katatonia will head out on a European tour with the likes of Porcupine Tree and Paradise Lost.

For more information on Katatonia, Night is the New Day, and Peaceville Records…