The Blast-beats Haven’t Silenced, Whether It Be Fear Factory or Arkaea: A Conversation with Arkaea Drummer Raymond Herrera 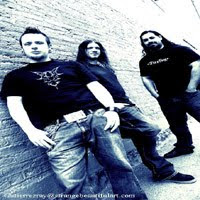 Many, including then drummer Raymond Herrera and guitarist Christian Olde Woblers, thought Fear Factory had a bright future. There were in the studio set to record the follow-up to 2005’s ‘Transgression,’ but things didn’t quite work out as planned. What resulted were eight new songs that eventually were transformed into ‘Years in the Darkness,’ the debut record from Herrera’s and Woblers’ new band Arkaea. With FF on the proverbial backburner for the time being, the two former members decided to move ahead and form Arkaea with the help of Threat Signal members Jon Howard and Pat Kavanagh.

Shortly thereafter, Burton C. Bell and ex-FF member Dino Cazares set aside their differences and reformed Fear Factory, much to the chagrin of both Herrera and Woblers (and their legal team), so Fear Factory was put to bed (for now), at least in this form, and renamed City of Fire.

So, back to Arkaea. ‘Years in the Darkness’ sounds as if it were meant to sound like the natural progression of Fear Factory had it remained, although with Howard at the helm, you know are listening to something completely different. It isn’t just a mere Threat Signal or Fear Factory offshoot or side project, this is something new and exciting.

Herrera took the time to speak with me recently about how the album title and album artwork were conceived, and how he and Woblers settled on the two TS members to round out Arkaea. Oh yeah, and he talked about Fear Factory too.

Get eXposed: Why did you decide not to rejoin Dino Cazares and Burton C. Bell in the new life of Fear Factory (since renamed City of Fire)?
Raymond Herrera: That’s one kind of interesting way to put it. Well, let me kind of give you a broad brush of what’s going on. For one, Christian [Olde Woblers] and I are still in Fear Factory. For two, Burton and Dino formed a new band, and then called it Fear Factory. They never consulted with me or Christian or anybody. They essentially just went off and did it. Obviously we have problem with them starting a new band but now it is a trademark issue. They don’t have the right to use the name. We have a contract and a trademark. It is definitely a pretty weird situation right now but there is nothing that reflects anything that they are talking about.

GE: So, would you say that there is no ill will between the four of you?
RH: There was a lot of ill will between Burton and Dino, which is why Burton quit back in 2001, and I had to go in and tell him that we could still do this, that we didn’t need to have Dino and that’s what we did. I essentially sat down with Dino and told him since I didn’t want to do it over the phone, and that we were going to continue on without him. I told him that he should get a lawyer and that we would do, so we could draft something up regarding the split. But now they are friends or whatever and now it looks like they are just going out there to do their own thing. I have tried to reach out to both of them on personal level. I didn’t really want to do that but I would’ve looked forward to not talking to either one of them. I have been trying to figure out a way to move forward but neither of them will call me back. The reason they were mad at each other was all BS to begin with, so it is kind of a weird situation.

GE: How did you know that Jon Howard and Pat Kavanagh were the right fit to complete the band?
RH: It was really Christian. It all started with Jon really. This record started out as the next Fear Factory record. We were about eight songs in and then the personal differences started arising with Burton, myself and Christian and Brut didn’t want to move forward. Christian said that we already wrote all of this music so why would we sit on it, and he suggested starting a new project. He thought of Jon because he had just produced one of the Threat Signal records. I didn’t know Jon all that well, so Christian was really the brains behind the whole thing. It was all his idea. I told him that if he thought Jon was really that good I wasn’t going to question it and Jon has worked out really great. Pat is the bass player for TS and since he was already in the band, we knew he was good. It just all made sense.

GE: I had read that you were trying out all sorts of other bass players, like Mudvayne’s Ryan Martinie and Limp Bizkit’s Sam Rivers?
RH: I think Christian was talking to those guys for a while, and I guess nothing came of any of that. While we were doing the bass player hunting, we were already working on the record since we were already eight songs in. The bass player was almost something to make the band look whole. These records don’t write themselves and don’t write themselves. I know he was talking was talking to a bunch of people and when the subject of Pat came up, Jon was pushing for him hard. When he came to the studio and I met him, I found out that he was really good. So, Christian pushed for Jon, Jon pushed for Pat and it just all worked out in the end. I definitely think that those were the right decisions and Christian made it all happen.

GE: Tell me about the band name. Is there a story behind it?
RH: There isnt as much of a meaning as the whole thing is kind of funny. Christian called me one day while he was working on vocals with Jon and said that he finally figured out the name of the band since we had been trying to come up with something for a couple of weeks. We wanted to come up with something different, something that wouldn’t pop a million sites in a Google search. You really have to take that stuff into consideration since you are talking about something people are going to identify with.

GE: Moving onto the new record, ‘Years in the Darkness’ has some suggestive artwork. Can you tell me how it came together, and is there a story behind it?
RH: It kind of started to piece together when we figured out the name of the record. There was a time when we were thinking of calling the record ‘Break the Silence,’ before we settled on ‘Years in the Darkness.’ We weren’t sure what we were going to do, but in the end we feel that the cover art is pretty slick and has a beauty and tragedy type of thing to it. It has been a big topic of question for us in interviews, and the last time we got that much hype for an album cover was when we released ‘Demanufacture,’ with the whole melding of man and machine. The cover is of note, and I think it is definitely compelling. The album cover is sort of your doorway to the band so I’m glad that people have really taken a notice to it.

GE: What can your fans expect with this record?
RH: From a musical standpoint, it is probably closer to Fear Factory than anything else, for obvious reasons, well more reasons than one. Other people who have heard the record say that it seems like a fresher, newer version of FF, but I wouldn’t necessarily agree with that. I don’t want to try and discredit FF in any way at all. It has a lot of elements from that band but also some new elements, mostly from the vocal side of things. With FF music you expect to hear Burton, but with Arkaea you get Jon, so that makes it very different. I’m not sure how familiar people are with Threat Signal, but this is even a huge step-up for him vocally because people think it is just Jon from TS signing, but he really stepped up. I remember him making a comment with this, saying that with TS things are very unison, but with Arkaea he takes it to another style, with a lotof clean stuff and a lot more melody. One of the most noticeable things is not just Jon’s vocal range but his rhythmic pattern is very different. When we started that was one of the first clashes I had with Jon, in just the way I write my drums. It is very in unison with the rhythm of the song, the way I have built this whole musical style on the drums that lends itself to the music. With Jon he has a very different approach to things vocally. He has a different approach to singing than I’m used to with Burton.

GE: What can we expect from you guys the rest of the year?
RH: Well, we are working on a few things. I’m working on an Arkaea video game with a developer and that should be out before the fall. We are going to be on a lot of video game projects that will coming out later this year and early next year. We are also going to be touring a lot as well and I am currently working on the remix record for Arkaea right now, which we’re looking to release later this year. We want to have a lot more visualization with the band, like DVD and TV type stuff where fans can learn about the band on a personal level. We want to give people a more concrete and visual aspect of the band.

GE: Oh, I forgot you’re a huge gamer.
RH: Yeah, I have been a huge gamer since the age of 10. If it hasn’t stopped yet it isn’t going to stop now, that’s for sure.

GE: Do you have any tours lined up that you can talk about?
RH: No, right now we are looking at five or six different things and I don’t want to misspeak about any of it. Make sure to keep checking out www.myspace.com/arkaeamusic or http://www.arkaea.com/ for news on that stuff. We did film two music videos for ‘Locust’ and ‘Gone Tomorrow’ recently. The response has been really amazing actually. I have gotten calls from friends and some business partners saying they have been blown away by the record.

For more information, check out www.myspace.com/arkaeamusic.