Review Rundown: Madder Mortem, Alesana, Nightmare of You, Arkaea, Bring Me the Horizon 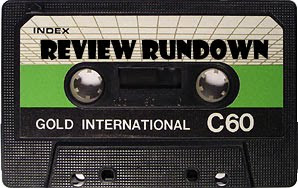 This time out, the Review Rundown takes a look at the latest releases from Madder Mortem, Nightmare of You, Arkaea, Alesana and Bring Me the Horizon.

Madder Mortem – ‘Eight Ways’ (Peaceville Records): ‘Eight Ways’ is enthralling and engulfing, a record that demands your full attention. You can’t turn away. It is as atmospheric and cavernous as it is technically precise; creating a sound rich and thoroughly layered. Madder Mortem are the kind of band that can be both devastating and stunning all in the span of five minutes (‘A Different Kind of Hell,’ ‘The Little Things’), due in large part to front-woman Agnete’s simply remarkable and awe-inspiring approach to and execution of putting herself into ‘Eight Ways.’ She adds a breath, no, a gust of life into the disc. ‘Eight Ways’ is an operatic take on modern folk metal, although Madder Mortem incorporate touches of death and thrash as well. (http://www.maddermortem.com/)
Grade: B
Go Download: ‘Riddle Wants To Be’

Nightmare of You – ‘Infomaniac’ (The Bevonshire Label): From the clean acoustic strumming and attractive melodies of opening track ‘Good Morning, Waster’ to the Tom Morello-esque guitar staccatos that abound throughout closer ‘Goodnight, Devil,’ capping the record off with a punchy, lively finish, Nightmare of You’s sophomore release ‘Infomaniac’ is a musical contradiction in and of itself, a modicum of the diversified pop sensibilities that Nightmare of You possesses. Most of ‘Infomaniac’ is comprised of material that post-exclamation point Panic at the Disco revelers will be fawning over (‘Eustacia Vye,’ ‘Amsterdam’) as well as something that would make Ludo proud, a spiteful revenge opus about lost love hidden under the umbrella of an indie pop love song that houses lyrics like “Hey sweetheart/Is that your new car/Why don’t you drive it off of a bridge/the pain is real and so are the pills/I can talk to my therapist and pretend you don’t exist (‘Hey Sweetheart’). These guys aren’t one of Atreyu’s ‘Big’ Dan Jacobs favorite bands for no reason. (www.myspace.com/nightmareofyou)
Grade: B
Go Download: ‘Hey Sweetheart’

Arkaea – ‘Years in the Darkness’ (E1 Music): What a blistering debut from Arkaea ‘Years in the Darkness’ is, a band that features both ex-members of Fear Factory and current members of Threat Signal. ‘Awakening’ and ‘Break the Silence’ should send fond memories of the classic ‘Demanufacture’ (see the Rhys Fulber influenced synth on ‘Break the Silence’) dancing through your head, until that is, Jon Howard starts singing. It is then obvious that you are listening to a new band, not just some side project. His vocals add merit (especially on ‘Lucid Dreams’), Raymond Herrera’s drum work remains littered with his trademark precision blast-beats and Christian Olde Woblers guitar work still chugs. Parts of ‘Years in the Darkness’ sound reminiscent of both the afore mentioned bands, but this is a work all its own, a record that doesn’t lend itself to one more than the other. (www.myspace.com/arkaea)
Grade: A
Go Download: ‘Rise Today’

Bring Me the Horizon – ‘Suicide Season’ (Epitaph Records): ‘Sleep With One Eye Open’ pays tribute to the off-timed metal chug that Meshuggah has made a living off of, but mostly all of ‘Suicide Season’ is mainstream hardcore with a cocky glam twist to it. This is surely a kinetic album; one overflowing with such an energetic force to it you might think these guys listened to a lot of Every Time I Die frowning up. There should be no question that frontman Ollie Sykes is talented, a jack of all trades if you will (check him out on the title track). ‘No Need for Introductions, I’ve Read About Girls Like You On the Backs of Toilet Doors’ is a towering display of guttural emotion, a 55 second outing that could be looked at as the albums defining moment. Bring Me the Horizon combine elements of death, gloom and thrash metal as well as modern metalcore. There are even some hard rock touches here and there, showing that not just Sykes, but the whole band is a jack of all trades (again, check out the title track). (www.myspace.com/bmth)
Grade: B
Go Download: ‘Suicide Season’

Alesana – ‘Where Myth Fades to Legend’ (Fearless Records): Alesana’s blend of melodic metalcore, powerpop and driving screamo could lead some to believe that they are something of a Between the Buried and Me of their scene; a chameleon of sub-genres if you will. The band do a whole lot wrong with their best release yet, ‘Where Myth Fades to Legend.’ Their aptitude in a variety of sounds should broaden their fanbase, ultimately bringing a smile to the face of many a scenester. This isnt a record you have to delve too deep into initially, by ‘A Most Profound Quiet’ and ‘Red and Dying Evening’ you should be sufficiently clued into the fact that these boys have some definite chops. (www.myspace.com/alesana)
Grade: B
Go Download: ‘Seduction’
Email Post