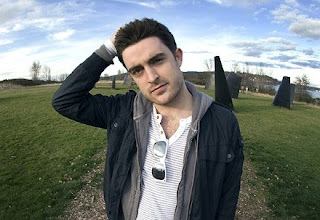 No one could say that Forgive Durden’s sole remaining member, singer and songwriter Thomas Dutton, isn’t a creative guy. As a matter of fact, he is so imaginative that he has yet to write a conventional album. Take a look back at the bands discography and you will find that 2006’s ‘Wonderland’ and 2008’s ‘Razia’s Shadow: A Musical’ were rousing concept records. Dutton is so resourceful that even after three-fourths of the band decided to exit in January of 2008, he continued on, and put together the bands best work to date in ‘Razia’s Shadow,’ with only the help of his younger brother and a computer.

Dutton is proof positive that you do not need a full time band in the studio with you in order to create something as lush and grandiose as ‘Razia’s Shadow.’ He only needed the help of some of the scene’s best throats today, as the new disc features contributions from a slew of bands, including the Dear Hunter, the Audition, Portugal. The Man, and the Matches.

Between spending time in the studio working on new material and attempting to bring his ideas to the stage, Dutton took the time to chat with me in depth about ‘Razia’s Shadow,’ including the recording process, the story and where this album takes him next artistically.

Get eXposed: Let’s talk about the new record. Tell me how the recording process of that went.
Thomas Dutton: I had the idea to record a musical for a while and had the whole storyline mapped out loosely in my head. My brother Paul is a music composition major at Western Washington University, and the band disbanded, so I asked him to step in and help me finish up. We had written one song when the band disbanded, but I was the driving force behind the whole thing. He was in school but was totally into the idea. I moved into Casey Bates’ studio about a half hour from my house for like a month and would just write during the week, working on the lyrics and the melodies. Paul would come down on the weekend to work on ideas and get the skeleton of the songs together. We pretty much did an acoustic demo for every song for the most part. We focused on those skeletons, getting those where we wanted them. We could both hear where the songs were going to go, listening to an acoustic song, imagining how they would sound with full orchestrations. Most of it was me and my brother sitting in the control room or me sitting in the bedroom, working on the music. We used a bunch of software to help write the orchestrations because we could slide the sounds around and change the instruments; it was really, really easy to experiments and try different things out. We had Rudy [Gajadhar] from Gatsby’s American Dream come in and record drums for us, and he did it in two different sessions; he just nailed it. For the guest singers it was about half and half, where some were in Seattle at the time. I flew to Chicago once to record Brendan Urie (Panic at the Disco) and Greta Saltpeter (The Hush Sound). I recorded their part with me singing it to show them what I had in mind. The other half of the people would do the same thing, like with Max [Bemis (Say Anything)], Chris [Conley (Saves the Day)] and Casey [Crescenzo (The Dear Hunter)]. I would send them the track and they would send back their version. It was a really cool experience since we used a lot of new technology for it, but it was also very kind of classical, and I loved the orchestral feel of the entire thing.

GE: Do you find that it is harder to record a concept album than a regular album?
Dutton: I’ve only done concept albums, really. Before this album was ‘Wonderland,’ which was a concept record and then before that we had an EP before we were signed. As far as full on releases, I’ve only done concept records. From my perspective it is easier for me. You have this full story and you know all of the pieces that you need as opposed to the other style, which I haven’t done. With an album of random songs it is harder to feel which songs fit and which don’t. I enjoy doing concept albums, it’s fun. You’re able to tie all of the songs together in order keep it cohesive.

GE: Is there a story behind the album title?
Dutton: All of the characters names are words from this ancient language, called Aramaic. They all have direct meanings to their character. Razia means secret, and that is also the name of the mountain that separates the light and the dark side in the story. I like what it hinted at. Neither side knew if the other exited or not, it’s kind of like this mystical legend since no one ever crossed the mountain. I like the way it sounded and the ideas behind it.

GE: What inspired you to write this disc?
Dutton: My whole life I have really liked musicals and pop music. I was just trying to really bring all of the things I love about music together; gorgeous arrangements that are fully orchestrated but at the same time have big, powerful drums and passionate, dramatic singing. These are all of the things I have loved about music mashed together into one thing. When I was growing up I loved a lot of movie musicals and lately I have been getting more into live theatre. Those have got me back into the whole musical scene. That’s what got my head back into the idea of trying something like this.

GE: What can we expect from FD the rest of the year?
Dutton: Im not quite sure yet. There are some festivals at the end of the summer but I don’t know about other touring plans. I want to also be able to relax and work on some new ideas with my brother that could bring us into some new directions. That’s the basic plan. I’ve been working with some people at a theatre here in Seattle, slowly, working on turning ‘Razia’s Shadow’ into a full on stage production.

GE: Are you going to stick with what you’re doing now or have you toyed with the idea of putting together a full band?
Dutton: Well, right now I mostly have together a full touring band. They are the same people from my last tour with the exception of one person and I really like the work and the job that they are doing. I don’t want to rush into saying that this is a new Forgive Durden, I want it to be natural. I like the way things are going right now. It will probably be my brother and I writing the music going forward. I really enjoy it and we have a lot of new things we could try; we complement each other very well. Only time can tell though what will happen next.

For more information, head over to http://www.forgivedurden.com/.
Email Post