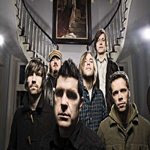 Emery have always been a band with a positive outlook. You know, the ‘the glass is always half full’ types. They have also been a band who don’t like to keep people waiting since the longest the guys have gone between records is two years. They have released an album every year for the past three years, including 2008’s EP ‘While Broken Hearts Prevail,’ the other half of the ‘…In Shallow Seas We Sail’ story.

You would think that a band who releases so much material so often would release some pretty bad stuff from time to time, but that couldn’t be further from the truth when it comes to the bands’ latest work, ‘…In Shallow Seas We Sail.’ As a matter of fact, the album is arguably the best record the band has put out to date, a sentiment critics worldwide have been agreeing with since its release. It is an uplifting album, maybe not always in sound, but always in nature, an album whose central theme is picking yourself up when you’re down and persevering through the rocky times in your life with the help of love. Yes, Emery are Christian, but they don’t like to be referred to as a Christian band. Just keep that in mind.

I recently had the chance to catch up with Josh Head, keyboardist and screamer extraordinaire for the Rock Hill, South Carolina post-hardcore merchants, before they hit the road for a headlining tour with Maylene and the Sons of Disaster in tow, in order to find out the meaning behind the albums provocative artwork, how ‘…In Shallow Seas We Sail’ came together and how he thinks the album stacks up to the bands previous works.

Get eXposed: Tell me about this upcoming tour. What can fans expect from Emery this time out on the road?
Josh Head: First off, we’ll have terrific bands supporting us. Maylene and the Sons of Disaster, Closure In Moscow, Secret & Whisper, Ivoryline, and Kiros are all awesome, and each brings something different to the table. Kids should definitely get to the shows early to make sure they see everyone. In addition to the bands, we’ll be playing material from all of our albums. If you like anything we’ve ever done, you’ll enjoy yourself at these shows. We’re still figuring out what lights and other things we’ll bring with us. It’ll be a fun show.

GE: How much of ‘...In Shallow Seas We Sail’ will be hearing live?
Head: We’re not sure yet. My guess is four or five songs, but we haven’t really had a chance to decide which songs we’ll be doing. We’ll get together before the tour and figure all that out.

GE: Sticking with the new record, walk me through the recording process of the record.
Head: Toby or Devin or Matt will come up with the bones of a song. It might be one part, or a verse/chorus, etc. Then we’ll all check it out and Dave will add drums and we’ll decide if we like it. If so, we’ll develop the song, and one of the singers will write lyrics. Matt records everything at home, which is great for us. For this record, we were all in Seattle at Matt’s writing and recording. Then we went to the Compound to work with Aaron Sprinkle. It was great to have that additional voice, helping to guide our creativity. Then Matt mixed some of the songs, Aaron mixed some, and David Bendeth and Dan Korneff mixed some. We’ve got a lot of ears working on our records.

GE: Is there a story behind the albums’ title?
Head: This album is a continuation of our last EP. When read together, the titles form a phrase: ‘While Broken Hearts Prevail…In Shallow Seas We Sail.’ I take it to mean that even when times are tough and you’re at the end of your rope, love wins out. Whether that love is for your significant other, your family, your creative outlet, a higher power, or something else, what matters is that it helps get you through the hard times.

GE: ‘…In Shallow Seas We Sail’ has some pretty imaginative and suggestive artwork. Who came up with the album art?
Head: Marc Johns came up with the art. I can’t remember who saw his work first, but one of the guys did, and really liked his style. We had Tooth & Nail reach out to Marc, and he agreed to work on ‘While Broken Hearts Prevail’. We were so pleased with that work that we went back to Marc to continue the theme, and create the pieces that make up the layout for ‘In Shallow Seas We Sail.’

GE: What were some of the driving inspirations behind the record?
Head: Love, faith, endurance, etc. We write about topics that we encounter every day.

GE: Do you feel that this is your strongest work to date?
Head: Without question this is our strongest effort yet. It takes elements from all of our records and packages them together as a new, exciting Emery. Anyone who has liked Emery will like this record.

GE: What can we expect from Emery the rest of the year?
Head: We’ll be on the road from late May through early September, with a few weeks off in July. First we’ll be part of the Zumiez Couch Tour, and then we’ll headline in July/August/September. In the fall, Toby and Dave will be welcoming the newest members of Emery into the family; both are having babies in the fall. We’ll hit the road hard in 2010, and do our best to conquer the world!