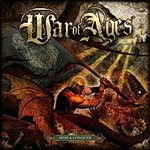 It should be pretty evident that Facedown Records knows what they’re doing. War of Ages’ ‘Arise and Conquer’ marks another successful metal release for the label, with the latest being Impending Doom’s ‘The Serpent Servant.’ It also marks the second appearance of As I Lay Dying mastermind Tim Lambesis behind the mixing board. Let’s see, two awesome metal discs, both produced by a guy who sings for arguably the best metal band playing today? Coincidence? You decide.

‘Arise and Conquer’ is a fantastic piece of metal euphoria. Though labeled as ‘Christian Metalcore,’ don’t let the metalcore branding fool you. Yes, they are a Christian outfit, but are far from metalcore. That’s almost a four letter word within the metal community, a tag that tends to cast you off as watered down, which is definitely something War of Ages is not.

‘Through the Flames’ is one of the noticeable strongholds of ‘Arise and Conquer,’ a mere footprint of what War of Ages is capable of accomplishing in today’s metal scene. This disc rips and tears through ten coherent, mindful tracks of finely tuned metal and houses exactly what every good metal album needs – riff-centric, chugging guitar, pace-keeping, dominating drums, anthemic, gang vocal hooks, and unwavering vocals from frontman Leroy Hamp.

If you wanted a thick slab of evidence that War of Ages here to stay, ‘Arise and Conquer’ is surely it.