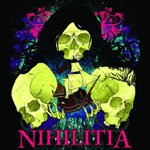 What do you get when you combine the words nihilist and militia? No, it’s not a lame joke if that’s what you’re thinking. In fact the combination of those words results in the name Nihilitia, and also accounts for the title of their debut disc, ‘Nihilist Militia.’ Yes, it is as simple as that.

This relative unknown power trio is making quite the buzz for themselves, having graced the stage with well known acts like the Sword, Skeletonwitch and Early Man, leading them to be hailed by some as Washington, DC’s own version of Made Out of Babies.

Right from the onset of opener ‘S**thouse,’ ‘Nihilist Militia’ is spastic, uncompromising and thoroughly dissonant, the way true stoner post-metal should sound. It is a bumpy ride full of irregular timing and cavernous guitars, one that does not let until the waning seconds of the album’s closer, ‘Lightyear.’ It is the bands tight knit musicianship that pulls all of the sounds and echoes together, something not many bands can attest to. One of the surefire reasons Nihilitia is able keep things sane is the seemingly endless vocal wavering of front-woman/bassist (perhaps a female Gene Simmons?) Sara Hussain. At times Hussain sounds incoherent and disjointed, but manages to stay level with her confused vocals, coming off to some as the ramblings of someone inside a padded room. Don’t take that the wrong however; it’s all just part of charm and overall aesthetic she brings to the table on ‘Nihilist Militia.’

‘Nihilist Militia’ is almost like a coming storm, you know what you are in for with distant rumblings, sudden thunderclaps and darkness all around. There is light at the end of the day however.