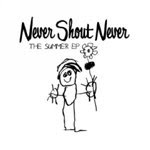 Remember how good Jason Mraz and John Mayer were when they first burst onto the scene? Can you imagine how smart the people who discovered them must feel? Well, now here is your chance to do the very same thing. Introducing Christofer Ingle, aka NeverShoutNever! At a spry 18 years of age, Ingle isn’t exactly a spring chicken when it comes to the industry. He has two other successful releases, ‘The Yippee EP’ and the ‘Me and My Uke EP,’ with the ‘The Summer EP’ being his third.

He would be better off staying away from full band soirees (‘I Just Laugh’) as it sounds out of place, and judging by the rest of the disc, it just doesn’t fit. Not to say the track is all bad, it’s just more forgettable than the rest of the effort. ‘Hummingbird’ is about as far as NSN! should go towards band medleys. The tracks piano touches add a subtle depth to the piece, doing their job in highlighting Ingle’s effervescent voice. He also manages to show flashes on inspiring songwriting (‘On the Brightside’) on ‘The Summer EP.’

He is the type of songwriter that could encourage tears and spark an increase in sales of Kleenex worldwide, but he does have a chance to get lost in the scene in which he calls home, but with more releases like ‘The Summer EP,’ that might not be too much of an issue. This is a collection of songs that leave a strong lasting effect and it’s not immediately disposable like most of his brethren.

While it would be nice to see NeverShoutNever! drop a full on release, ‘The Summer EP’ is still a good summer listen that is light, fizzy and refreshing. Don’t be surprised if you hear one of more of these tracks during an episode of Scrubs sometime soon.