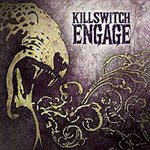 It’s no small secret that people everywhere are afraid of change, especially when it involves their favorite band. Music fans are more fickle than sports fans if you could believe it. Once they find a sound they like, they stick with it. Take for example Killswitch Engage. Their latest self titled release, the bands fifth to date, just goes to show they are sticking to what they know – tried-and-true metalcore.

Following the new trend of moving towards more melodic pieces they started with 2006’s ‘As Daylight Dies,’ this release (ironically their second self titled effort) flows even more effortlessly off the page, housing more harmonies than fans might be able to handle. Is traveling this avenue successful? Well, judging by the fact that the album charted on the Billboard 200 at number 7, then yes.

Sure, it’s an enjoyable listen. If you were to look at it, KsE have been teetering on the brink of symphonic metal for a number of years, with this release being their closest brush yet. Their sound is crystal clear here, something perhaps caused by the band going outside the box so to speak by enlisting Brendan O’Brien to produce (Incubus, Rage Against the Machine). Hell, they are a couple epic guitar solos short of a full blown Iron Maiden revival.

It is the usual KsE foray; a clear example of ultra tight musicianship and superior musical skill, the bands best musical work yet, really a vessel captained by vocalist Howard Jones. His vocal wizardry is as sparkling as ever, readily transitioning between up-tempo growls (‘Never Again’) and brilliant melodies (‘The Return’). On this record Jones continues to prove that he is one of the best in the game, a true standard bearer of the genre. KsE was very good with Jesse Leach fronting, but with Jones at the helm, the possibilities for this band are truly endless.

Some of this will sound familiar to you for sure, but this release isn’t without its moments in the sun. Debut single ‘Starting Over’ is one of the best tracks the band has ever committed to tape, and the one-two combo of power ballads ‘Lost’ and ‘This Is Goodbye’ surprisingly wax emotional, leading to a memorable outro.

Killswitch Engage’s sound will always be a point of conversation. Should they return to the oft-thrash sound of 2002’s ‘Alive Or Just Breathing,’ or should they stay the course? Regardless, with as good as this album sounds, they have got to be doing something right.