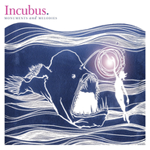 Incubus releasing a greatest hits compilation had really been a long time coming for the band, one who has reached the upper echelon of rock music stardom. Not everyone deserves to release a greatest hits album, namely No Doubt, but in the case of Incubus it is surely justified. The Calabasas, California outfit has been nominated for a Grammy, charted four number one singles (‘Drive,’ ‘Megalomaniac,’ ‘Anna Molly,’ ‘Love Hurts’), and released successful album after successful album. There are also a band that has influenced the way many other bands look at and approach music, so it’s suffice to say they deserve some retrospect with ‘Monuments and Melodies,’ their first greatest hits compilation since the bands inception way back in 1991.

‘Monuments and Melodies’ plays out mostly as you would expect, coming in the form of named separate discs, the first being ‘Monuments.’ This part of the album houses 13 singles that the band released off of their ‘Make Yourself,’ ‘Morning View,’ A Crow Left of the Murder’ and ‘Light Grenades’ albums. With ‘Monuments and Melodies,’ the current trend of bands including new material on their greatest hits record continues, as Incubus offers up two new tracks for the masses to snack on, ‘Black Heart Inertia’ and ‘Midnight Swim.’ The former picks up stylistically right where Incubus left off after 2006’s ‘Light Grenades’ and before their self induced hiatus. Both tracks were produced by Brendan O’Brien, who produced ‘A Crow Left of the Murder,’ ‘Alive at Red Rocks’ and ‘Light Grenades’ for the band.

The second half, entitled ‘Melodies,’ features many rare Incubus tracks, which were advertised as previously unreleased, but could be found on a number of Incubus albums of the past. Regardless, ‘Melodies’ puts all of those hard to find tracks in one place, featuring the bands cover of Prince’s ‘Let’s Go Crazy’ and an acoustic version of ‘A Certain Shade of Green.’ ‘Melodies’ also plays hosts to an altered full band version of the track ‘Pantomime’ as well as the track the albums gets its name from, a b-side from the ‘Megalomaniac’ CD single.

This compilation is a much needed collection of songs for any and all Incubus fans, and should serve as the picture perfect primer for new fans wanting to introduce themselves to the band.
Grade: A
Listen to: ‘Black Heart Inertia’
Email Post