Reviewed! Eyes Set to Kill - 'The World Outside' 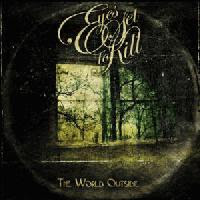 Eyes Set to Kill
'The World Outside'
Break Silence/Koch Records

Eyes Set to Kill hit paydirt with 2008’s critically acclaimed debut, 'Reach,' and now, just a mere 16 months later, their sophomore disc, 'The World Outside,' finds the band even better. 'The World Outside' is darker, more haunting yet more fluent, and better produced. Basically it is better equipped to propel the band to the next plateau.

This band hasn’t been criticized for much, but one thing they have been plagued with is the oft-muddied and adolescent screams of backup vocalist Brandon Anderson. Anderson has obviously righted the ship and found his flaws, something that could probably attest more to the albums heightened production level. Regardless, Anderson’s contributions to the World Outside actually make sense this time around.

For as surprisingly ballsy and dense as the World Outside is, there is an air of vulnerability during the 59 second piano aura that is ‘Interlude’ as well as the 55 second tryst that is ‘Hollow Pt. 1.’ The suitable closer, ‘Come Home,’ adds a shade of tragic beauty (ala From Autumn to Ashes), to round out the already noteworthy release. The popularity garnered by the closing effort actually has vocalist Alexia Rodriguez penning an acoustic album.

While it may not be quite as catchy and syrupy as their debut 'Reach,' 'the World Outside' is an album that showcases the bands talents; angular guitar riffing, superior vocal interplay, and an attention-to-detail style of songwriting that in the end produces fantastic hooks and mostly beguiling tunes.
Email Post