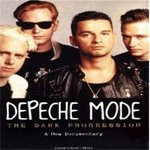 Depeche Mode is a band that needs no fancy introduction, a band about which nearly everything has been said. They have released 12 studio albums to date, including one earlier this year (‘Sounds of the Universe’), and have toured to literally every corner of the globe. They are the reason so many of today’s bands are making music, having influenced countless bands across the musical spectrum, including Fear Factory, Linkin Park, the Killers, Coldplay and the Crystal Method, to name a few.

They are the band that keeps on giving, this time in the form of their latest DVD retrospective, ‘The Dark Progression.’ This release is unauthorized, meaning not released by the band and/or their record label.

Although it runs only 97 minutes, every minute counts. ‘The Dark Progression’ recounts Depeche Mode’s journey and evolution throughout the years, as seen through the eyes of the band members themselves as well as friends and contemporaries, including Thomas Dolby and Gary Numan as well as band biographer Jonathan Miller and various producers and music experts.

Aside from the bio portion, the meat and potatoes of the DVD, ‘The Dark Progression’ plays host to a variety of material, including hard to find live performances, interviews, news reports and so much more.

The extras housed on the DVD aren’t really much to write home about, basically your basic standard music DVD fare, just some extended interviews and the like. This is a section that ‘The Dark Progression’ could’ve spent more time concentrating on, and could’ve gone so far as to add more, no matter what it was.

If you ever had a question regarding the seminal English act, you don’t have to look any further than ‘The Dark Progression.’ From start to finish, this DVD release truly is a complete work about a band who have spent over three decades releasing almost nothing but.
Email Post