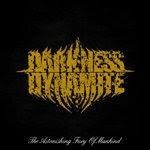 If Darkness Dynamite isn’t on your musical radar, don’t worry because you’re not alone. But if you are a fan of prominent bands like As I Lay Dying and Killswitch Engage, this is a band that you’ll want to turn your attention to. Their first release in the States and first for Metal Blade, ‘The Astonishing Fury of Mankind,’ is a record best fit for consumption with the top down, at an advisable volume of however high your volume knob goes.

‘The Everlasting Grace of Mind’ is a touching effort in its own right, and really is the only time in which ‘The Astonishing Fury of Mankind’ let’s up, but don’t let it lure you into any false sense of security as the albums’ title track will bring you crashing back down to earth by way of breakdown after breakdown, killer hooks and even some gang vocals. Interestingly enough, these final two tracks of the album is where Darkness Dynamite is at their best, a sound in which they should continue to reside in the future.

Sure, the majority of this disc might sound borrowed from other bands, but DD do enough to keep things appealing. Fans should find this effort engaging, the wheel isn’t exactly being reinvented here.

‘The Astonishing Fury of Mankind’ is a quality addition to the already good looking French metal scene, although it might not always sound French.