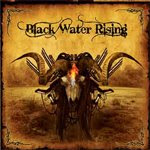 Black Water Rising’s self titled debut is a record that will make you forget about singer Rob Traynor (Dust2Dust) and guitarist Johnny Fattoruso’s (Stereomud) former affiliations completely. Ok, maybe not Stereomud, but that is another story entirely. This is their new gig, something different and albeit better, altogether.

These guys aren’t out to reinvent the wheel; something the band is unabashed in saying. They are simply out to write huge guitar driven rock and roll that is listenable, which they have accomplished with this release. It’s an infusion of modern rock into a strong early 90’s sludgy, but not too sludgy, core. This is a band that Zakk Wylde would be a fan of, hell; he might even want to join.

This record is full of surefire winners teeming with uber-chugging guitar work and resonant, piercing drums, not to mention some solid songwriting on the part of Traynor. He is obviously pissed at someone, pointing out the flaws and shallowness of vanity during the albums opener ‘The Mirror,’ exclaiming ‘blame it on sun/on the moon/on the tears we cry/you just remember/the mirror never ever lies.’ Almost no one or nothing is spared, including organized religion, as Traynor says during ‘Hate Machine,’ ‘you’re so blinded by faith in a book/nobody even bothered to look/words distorted and mistook/by the greed of corrupted men,’ or during the opening of ‘No Halos,’ as Trayor states ‘ain’t no halo over anyone’s head/I don’t give a damn what your good book says.’

You know what you’re getting with Black Water Rising. These are four talented musicians who don’t pull any punches about what they’re about, which is kicking ass and taking names in the form of monstrous guitar fueled rock and roll, complete with enormous grooves, soaring melodies and serious hooks. This is blue collar hard rock full of grit that in the end is ultimately accessible and overwhelmingly enjoyable.