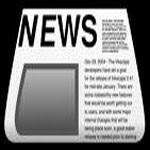 Death-metal icons CANNIBAL CORPSE are issuing a limited-edition 96 page comic book exclusively at the Hot Topic booth on this summer's Rockstar Mayhem Festival tour. Drawn entirely by Vince Locke, who illustrated the acclaimed graphic novel ‘A History of Violence' and each of the band's album covers, the Evisceration Plague comic graphically depicts a story for every song on the band's album of the same name—arranged in order, no less.

As an added bonus, each copy comes with a copy of the album.“Vince Locke has done an incredible job turning our lyrics into blood-soaked and vicious illustrations for the Evisceration Plague comic book. He really has captured visually what we were trying convey lyrically. His artwork has brought our macabre songs to life in truly explicit fashion...fans of graphic horror will not be disappointed,” comments bassist and founding member Alex Webster.

Check out a preview of the comic book HERE and don't forget to grab a copy at Mayhem this summer before they sell out!
Email Post