It’s ‘Reality vs. the Optimist’ in a Fight to the Death: A Conversation with Avant-Rockers Kiss Kiss 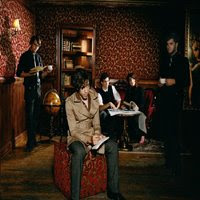 It’s ‘Reality vs. the Optimist’ in a Fight to the Death: A Conversation with Avant-Rockers Kiss Kiss
http://www.myspace.com/kisskiss

There is a good chance you’ve never heard of Kiss Kiss. Alright, alright that happens, but there is also a good chance you may have never heard the type of music the band is currently creating, which many people, including the band, refer to affectionately as circus punk, orchestrated rock and something you would enjoy during a stay at a mental institution. Yes, that is true, and yes, the music is good.

They already have one quality album out through Eyeball Records in ‘Reality Vs. The Optimist’ and have another out now entitled ‘The Meek Shall Inherit What’s Left.’ The record continues the bands avant-garde, off-the-beaten-path road to songwriting.

In an effort to introduce Kiss Kiss to a larger audience, I recently had the chance to speak with three-fifths of the Milton, NY experimental alt-indie outfit, guitars/synth/backing vocals - Mike Abiuso, electric violinist Rebecca Schlappich and drummer Jared Karns – in order to gain a better perspective on where their ultra unique sound comes from and what influences it, as well as how the recording process of ‘Reality vs. the Optimist’ went for the band.

GE: Tell me about a Kiss Kiss live show.
Abiuso: Kiss Kiss live shows take what’s on Kiss Kiss album’s and allows us to enhance it. One way is you can't get the dynamics to come across the same way on record as you can live. Another important aspect is our live energy. In the studio often we are sitting down discussing and recording in a very calm fashion (sometimes) and live we can feed off crowds, stage problems, personal problems, moods of everything to create a show that is full of emotions and life.
Schlappich: Balls to the wall, complete mayhem. We are just on the brink of dissolving into chaos, and it's that kind of organized insanity that hits people in the face and keeps them coming back to our shows. And we love our fans for that! Their support keeps us going.
Karns: We just go up and do what we do basically. This can include anything from badgering the crowd to making jokes to just simply playing. Whatever we're feeling gets communicated on stage - we're notthe kind of band that can hide our emotions and play the same exact set every night. When we come into a town people see a very unique performance that's a reflection of where we were at mentally thatnight.

GE: Tell me about the recording process of ‘Reality Vs. the Optimist.’
Karns: After putting out our first EP we had a crazy amount of songs stockpiled and ready to work into an album, but then our first violinist, who wrote half the songs, quit and we were left with an almost album. So we rented a trailer out in the backwoods and practiced the songs we knew were going to be on the album like crazy and wrote ‘Satellite,’ ‘Sh**s in Suits,’ and finished up ‘Vagabond.’ Recording it was a completely new experience because none of us had been in a real studio before. We quickly learned that all the practice in the world can't make every take perfect right away. We would keep doing takes all together live until we got the one that felt right as a band. Our motto was a picture Josh drew of a heart with a big happy face and big hairy balls coming out of his chin. Every song had to be the right combination of heart and balls. It's weird though because even though it feels like a nice unified piece if work, the band was not. Most of the band quit soon after, and now Josh and I are the only current members who actually played on it (laughs).

GE: With such a thought-invoking title, what message does the record send to listeners?
Schlappich: I didn't have a hand in naming the album, but to me it's about the brutality of real life constantly chipping away at your ability to "look on the bright side."
Karns: If you are of the meek, you'll simply inherit the downfall of this planet and think you're happy with it, but if you're strong you'll rise up and learn how to live off the grid and not be dependent on theinstitutions we hold so dear, even though as we've seen in the last few months, they're all fallible.

GE: What are some of your musical influences as a band?
Abiuso: From heavy stuff I like, like Converge, the Dillinger Escape Plan and Mars Volta to classics such as the Beach Boys and the Beatles to acoustic stuff like Elliot Smith, to poppy Michael Jackson. The list is pretty ridiculous. As far as our music goes, I would say it contains hints of Gogo Bordello/Mr. Bungle for its Middle Eastern aspect. Need I go further? Because this can be ten pages long.
Schlappich: We all have our own musical influences, and it's that musical diversity combined with our musical background and education that influences us as a band. Personally, I am influenced by Stephane Grapelli, Eddy South, Stuff Smith, Regina Carter, and Itzak Perlman.
Karns: Stravinsky, King Crimson, Mr. Bundle, The Beatles (obviously), Nirvana, 90's rock in general like Hum, My Bloody Valentine, Stone Temple Pilots because that was stuff that seeped into our heads whenwe were growing up. We like that raw aesthetic and it would be nice to see that again.

GE: What influences you to write your songs?
Abiuso: Our love of creating and performing creative music and stretching boundaries so hopefully other bands or musicians will not listen to it and be like "oh the radio station/TV is playing this so let’s get my buddies together and recreate those shi**y songs, but make them cool cause we are doing it." That’s the worst.
Schlappich: Mostly what influences our songs is frustration, aggravation, and a supreme love for dissonance, mixed meter, Stravinsky, Ligeti, and Satie.
Karns: Overwhelming boredom, frustration, and overactive minds, as well as a constant need to tinker and make noise.

GE: How did your sound develop? Was the endgame to sound the way you do now?
Schlappich: There's never an endgame. Ever. We're always evolving, always trying new things, and always creating. I think that's true of any band worth listening to. And I think you will hear a huge evolution in our sound on our new record.
Karns: We just write what feels right to us and we happened to know a guy who played rock violin in college and we thought that would be a good sound to incorporate and be an alternative to lead guitar solos. He left but the sound stuck, so we've always had a violin. There is no end to the development of the sound, we're always evolving.

GE: How would you describe your music to someone who hasn’t heard you before?
Abiuso: Our music has been described to us as theatrical circus punk, orchestral rock, or the theme song to your stay at the insane asylum. I would just say that it’s us, but that doesn't mean anything.
Schlappich: Describing our music is one of our least favorite things to do. I do best just saying what other people say, which is circus punk, orchestrated rock, what you would compose in an insane asylum, something that Dr. Frankenstein would write.
Karns: The maximalist avant-rock, circus-punk soundtrack to being stuck in a mental institution where we’re the only one who's not crazy.

GE: How did you get picked up by Eyeball Records?
Jared: On our first tour we got on a basement show in Philly and the promoter there liked us a lot. He said his band had been talking with Eyeball and he'd pass along our demo. We got an email from them a week later saying they and Geoff from Thursday had fallen in love with our record and would like to work with us.

GE: What’s next for Kiss Kiss?
Abiuso: From here we are going to get the new album promoted, pressed on vinyl, released, and tour on it until people can't take it anymore!
Schlappich: New album, ‘The Meek Shall Inherit What’s Left,’ will be coming out in the next few months, and heavy touring.
Karns: Play tons of shows, festivals, whatever, get on whatever tours we can to get this record into people's hands.

To check out some of their music and to see what things they are up to, head over to http://www.myspace.com/kisskiss.
Email Post