In Their Eyes, Disco Isn’t Quite Dead Yet: A Conversation with 70’s Revivalists Hypercrush 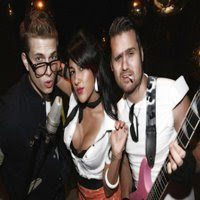 In Their Eyes, Disco Isn’t Quite Dead Yet: A Conversation with 70’s Revivalists Hypercrush
www.myspace.com/hypercrush

To many, the disco era died and was buried a long time ago, but there are those who would like to see the once revered and maligned genre again rise to prominence, among those semi-revivalists would be the three piece, self professed ‘doo-hop, electro deathcore supergroup,’ Hypercrush. These guys and girl are on a mission to bring the music world to their knees, all with the use of a keytar and some cleverly crafted raps. Hypercrush may not be alone in their quest either, as evidenced by their thousands upon thousands of MySpace friends and multi-million page views and song plays.

While recording their latest release, ‘Mixtape Vol. 2,’ the band took the time out of their busy schedule to fill me on a few things regarding their new music video for ‘Robotech’ as well as when we can expect the group back out hitting the pavement.

Get eXposed: Tell me about your new video for ‘Robotech.’ Who came up with the idea for the video?
Hypercrush: We wanted to do a Tron themed video with a lot of CGI. We wanted it to be retro and futuristic at the same time. Our buddy Mickey Finnegan (the director) came up with the rest.

GE: With all of the effects and graphics, was it a hard video to put together?
HC: Well it wasn’t hard for us we just showed up and rocked in front of a green screen. Justin Crook did all the graphics and he is amazing. It took a while so I assume it was a lot of work for him. Everything in the video is CGI except for us so it was a lot of work.

GE: Had you considered any other treatments before this one?
HC: No. Mickey [Finnegan] directed our previous video ‘The Arcade’ and we loved it. We read the treatment he did and we were ready to roll.

GE: When can we expect you out on the road with a proper tour?
HC: Well, were not sure as of yet. We are finishing up our album and as soon as that’s done we will start touring immediately.

GE: What can we expect from you the rest of the year?
HC: We’re going to drop a hefty mixtape very soon. Our album will drop soon after that and then we will be doing some serious touring.

Check out more of the band over at www.myspace.com/hypercrush.
Email Post