History Will Always Repeat Itself: A Conversation with Tony Fredianelli of Third Eye Blind 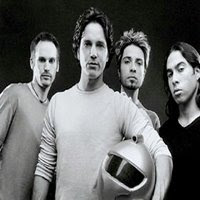 History Will Always Repeat Itself: A Conversation with Tony Fredianelli of Third Eye Blind
http://www.thirdeyeblind.com/

It has been a long time since we have heard from Third Eye Blind, the band that dominated pop rock radio in the 1990’s with all of your favorite songs like ‘Jumper,’ ‘Graduate’ and ‘Losing A Whole Year,’ six years to be exact. That will all end come August 18 as the band will street ‘Ursa Major,’ their fourth studio album and first since 2003’s ‘Out of the Vein.’ There are also plans in the works for an immediate follow-up, ‘Ursa Minor.’

Third Eye Blind continue to sell out shows, the same way they did 10 and 15 years ago. Fans have not forgotten about them, and neither has the pop music scene. In-between a recent tour surely full of sold out crowd, guitarist Tony Fredianelli took the time to sit down with me to discuss everything ‘Ursa Major’ related, and where we can see the guys throughout the rest of the year. I should also take the time to apologize to Tony for pulling his attention from the coffee he had in the microwave on his tour bus.

Tony Fredianelli: I wanted to start out by mentioning our new website, http://www.thirdeyeblind.com/, it’s a really interactive thing where people can go. It is a total social networking site. It’s the place to go for people wanting to know exactly what we are up to, and find out anything they want to know about us really.

GE: Tell me about ‘Ursa Major.’ Walk me through the recording process of that record.
Fredianelli: It was like if you were living a Nightmare on Elm Street and everyday you woke up Freddy was at your door. It was pretty much a nightmare actually, only because we rebuilt a studio and our singer had really bad writers block. It just wouldn’t happen. He kept second guessing himself and that just went on and on and on. It has taken five and a half years. At least Axl Rose beat us with his album, for them it had been something like 11 years. It could always be worse.

GE: What has been the inspiration for this new record?
Fredianelli: The idea was to make sure that the record wasn’t forced. When you’re a good musician, and basically anyone who does this for a living is a good musician, you can pretty much write a song. To get those special songs, the ones that are really beyond your grasp special, those are the ones that are more elusive. They happen when they happen and they are magical. They aren’t really within your control; getting those types of songs takes more than being a great musician and having a lot of talent. I don’t want to say luck because there is a level of creation in it. There is this spark that has to happen, just like when you try to make flint turn into a spark, something has to happen, and that spark is elusive. Our singer just couldn’t seem to find that spark – he wrote the lyrics eight times. To find the ones that jump off the page and hits, where everything is there, we just couldn’t seem to get it.

GE: How will this record will be different from other TEB records released in the past.
Fredianelli: It’s not a complete departure for us, it’s not like we are playing house music now. What it does do in a very nice way is that it brings you back to more of our first record. The production is more even and more flowing, where with the second and third ones, I think they sound a little overproduced. For me, just my opinion, this record has a more organic feel for me, just the guitar against solid lyrics and singing. It’s not super produced crap which is something we wanted to get away from.

GE: What can we expect from you guys the rest of the year?
Fredianelli: Well first off, the record drops August 18, and then there will be another tour which will see us possibly go to Japan. We are going to spend the time promoting the new record then I’m going to be making my own solo record. I’m also producing two other projects literally right on the bus. That’s how it’s become now – you have a laptop and ProTools and you are making records on your bus. That’s the music world now; it used to be that you had to go out to a big studio and spend lots of money to make a record, and now you can just make a record on your own bus. I’m not trying to sound cynical but it’s just not the same business. It’s bad for the artists because it’s hard to make money doing this, even if you are doing well. The old days of getting a deal and hitting at radio are over, they’re dead. It’s depressing.

Check out all things Third Eye Blind over at http://www.thirdeyeblind.com/.
Email Post