Giving Credit Where Credit Is Due: A Conversation with Tobin from Flatfoot 56 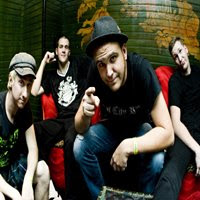 Giving Credit Where Credit Is Due: A Conversation with Tobin from Flatfoot 56
www.myspace.com/flatfoot56

From guitars to mandolin to above all else, bagpipes, Flatfoot 56 is pretty adept no matter what instrument they happen to be using. The Windy City celtic punk brawlers have been making quite the same for themselves throughout the years, most notably with their spirited album releases, including ‘Knuckle Up’ and ‘Jungle of the Midwest Sea,’ two albums that are crawling with angst-ridden tracks any self serving punk band wishes they could call their own.
With a new album in the works and various tours coming and going, Tobin Bawinkel, frontman for Chicago’s Flatfoot 56 checked in from the road and took the time to sit down with me to discuss a number of topics, ranging from the progress of the bands new as yet untitled record and when we might be seeing it released, to what people can expect from the band live.

Get eXposed: Let’s start off by talking about your current tour. Can you tell me a little bit about how that has been going so far?
Tobin Bawinkel: It has been going good. The shows have been good with really good responses from crowds here and there. It’s been fun.

GE: Tell me what fans expect from you guys live.
Bawinkel: Probably a very intimate experience and aggressive, if that makes any sense. We just want everyone to get together to have a great time and create an experience for everybody. The whole idea for every Flatfoot 56 show is to make people feel comfortable when they are there. We want them to get out of themselves a little bit and have fun. We talk to fans all the time that say back in the day punk rock bands didn’t really care what fans thought of them but it’s all so different nowadays. A lot of stuff today is based on how you look and not on how much fun they are having. That needs to change and our show is our attempt at that. If you want to move around, the move around, if you don’t, then don’t. We want you to come out and have a good time. Just give us a chance.

GE: Can you tell me a little bit about your upcoming record. How has that been going for you guys so far?
Bawinkel: It has been going great. It will be completed soon and we will be shopping it to some labels. Johnny Rioux from the Street Dogs produced it. He did a great job, he’s an amazing producer. We are really excited about it – this record is something that all of us are really stoked on. It’s got a good diverse feel .We have always been a band that really wants to put out records that have a diverse tempo to the songs to make it interesting. There are some songs that are a little more Celtic, some hardcore and some that sound a little more oi, but at the same time, really sound like us. That’s one thing we really made sure we kept. It covers a few different topical issues, like love, something we haven’t really touched on in the past. We had always been a band of single dudes, but some of us are engaged and married now so that inspires some things for sure. It’s still the same tough mentality, same straight forward mentality for us.

GE: Any chance you might have a ballpark date for when it’ll be released?
Bawinkel: We’re hoping to have it out by the end of the summer, if not the fall. I think any time after that would be too long. Sometime hopefully end of summer and early fall would be ideal for us, so we will see how it goes.

GE: What will you be up to the rest of the year?
Bawinkel: Were going to be doing some festivals, but holding things low since our bagpiper will be getting married. We should be hitting Europe in the fall for some festivals then some support dates after that.

Check out more on this unique band over at www.myspace.com/flatfoot56.
Email Post