This Summer Isn’t All That Dangerous: A Conversation with Cody Payne of the Dangerous Summer 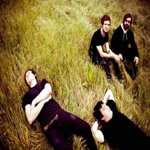 This Summer Isn’t All That Dangerous: A Conversation with Cody Payne of the Dangerous Summer
www.myspace.com/dangeroussummer

The Dangerous Summer are the next band in a long line of solid powerpop acts that Hopeless Records has churned out, and they probably won’t be the last. They are a band that has things working for them right now, including tours with the Secret Handshake, Ace Enders and Person L, as well as their finest work to date in their new album, ‘Reach for the Sun.’

‘Reach for the Sun’ is an album that the Dangerous Summer can be proud of, an album full of the prototypical style of powerpop that scene fans have loved and embraced for some time now. It is by no means an album that can be simply cast off, rather its one that deserves some attention. It should also introduce the boys to a new crop of fans, as well as keep their existing fanbase extremely happy and singing along all the way through.

I had a chance to catch up with guitarist Cody Payne during the tail end of the bands ‘No Parents No Rules’ tour with the Secret Handshake, right before the start of their ‘BBQ Across America’ tour with Ace Enders in order to find out just what went into recording the new disc, why it was important to stick with Paul Levitt to produce, and how the band went about choosing the debut single.

Get eXposed: Let's talk about touring. You're on the road now - how has that been going? And are you looking forward to getting out with the Secret Handshake?
Cody Payne: Things have been awesome. The shows have been getting better and better each and every night and everything is just running a lot more smoothly than they used to. We're so excited to go out with the Secret Handshake, Luis has been a friend of ours for a long time and we have always talked about eventually touring together and finally he called us one day asking us to be on the tour. It was such a good thing to happen for us right as we have an album come out.

GE: For those of us who have not seen you live, can you tell me what a TDS live show is like?
Payne: Haha, well lately since we are just one of the supporting bands on this tour we can only play six songs every night, but we try to play the songs just as they sound on the album, if not better or more powerful. There are a lot of details in our music that don't really get picked up on the albums but they are definitely there in the live show. A lot of people have told us our songs are better live than they are recorded.

GE: How much of the new record are you jamming live?
Payne: Right now we are only playing about three new songs. Obviously we haven't played them nearly as much as the older stuff so we are still working out the kinks and trying to get them down perfectly.

GE: How is the crowd responding to the newer tracks?
Payne: Everyone has been reacting great to the new stuff, which is awesome because a lot of people tend to stick with the older stuff from most bands, but I like to think all of the new songs are a step up for us.

GE: Speaking of new music, walk me through the recording process of 'Reach for the Sun.'
Payne: ‘Reach for the Sun’ was definitely a new experience for us. We recorded it with Paul Leavitt and it was the first time we had a real budget to work with on an album so that was amazing. We got to spend a month in the studio and really work on our songs and make them as perfect as we could. The first week we spent doing preproduction with Paul, sort of just demoing the songs and changing little parts here and there and just making the songs better. Me, Tyler and Bryan spent the first couple of weeks just recording all the instruments and focusing on that aspect of the music while AJ worked on
vocals and melodies. After that he recorded some rough versions of his lyrics and we sort of broke those down and figured out melodies that we were perfectly happy with. After that we just spend the last ten days or so recording vocals, harmonies and all that good stuff. It was an amazing experience for us as a band, and we cannot wait to do it again for the next album.

GE: You stuck with Paul Levitt to produce. Tell me what he brought to the record.
Payne: We have worked with Paul all of our lives really. He is such an underrated producer; he really knows how to capture what we are going for and really helps us have the sound we want. We are a very drum and guitar based band and he is just amazing at recording those and making them sound full and powerful. Amazing man, amazing producer.

GE: What was the inspiration behind this record?
Payne: We spent a lot of time at home doing nothing and just living normal lives. We got to experience normal things and go through real problems. Most of the inspiration was just us wanting to write good songs that we loved because most the music coming out lately just wasn't making us happy. We wanted to make something we loved with real lyrics and emotion that people can actually relate to. We missed the days when music was real.

GE: How did you go about choosing 'Where I Want to Be' as the albums lead single?
Payne: It was just kind of the first song we wrote for this album. We felt like it was a song that really brought our exactly what we were going for as a band. We love every aspect about it.

GE: What can we expect from the Dangerous Summer the rest of the year?
Payne: We are probably going to be touring for a majority of the year. We will definitely take some time off in the winter to start writing some new ideas and stuff but for the most part we plan to just tour the world and try to get the word out about this album as much as possible.

In order to spend some more time with the band, head on over to www.myspace.com/dangeroussummer.
Email Post