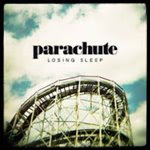 If you have watched any amount of television recently, chances are you already have heard Parachute. You may not know it right away, but if have seen the new Nivea skincare commercial; you’re already familiar with the bands track, ‘She Is Love.’ Although the Charlottesville, Virginia outfit are a mere one year removed from graduating from college, they have enjoyed successes that many bands will never get a whiff of, including being featured in a major commercial campaign, touring with O.A.R. and Switchfoot and playing in front a million people alongside Taylor Swift and the Jonas Brothers in Times Square.

Now it is time for their next rousing success, their major label debut, ‘Losing Sleep.’

‘Losing Sleep’ is nothing short of wonderful, an album full of this years’ best pop rock tracks to date. From start to finish, it’s hard to find a noticeable blemish on this record. Parachute is a band that knows how to write a solid tune, from the catchy, infectious verses to the sky-high, sing-a-long choruses, these guys know what it takes to keep the listener entertained with their tight musicianship and superior musicality. ‘Losing Sleep’ is the best album that Maroon 5 never wrote, and one doesn’t have to look further than ‘She (For Liz)’ to start the conversation of comparisons between the two bands.

It really begins and ends with vocalist/pianist Will Anderson. Anderson is as comfortable and talented behind a piano as he is in front of a microphone, leading some to think that his influences might include Jacks Mannequin and Mae (‘Mess I Made,’ ‘She Is Love’). Even the lyrical content of ‘Losing Sleep’ is top notch and utterly relatable; the album contains songs about heartbreak and dealing with love lost, regret, mistakes, and attempting to pick up the pieces.

There is no question about it; ‘Losing Sleep’ is an album that just cries out to be heard. It just begs for radio airplay, something the band is unapologetic about. Parachute has written an album that they want people to hear, and there really isn’t anything wrong with that if you think about it.

The scary thing is that ‘Losing Sleep’ is only their first album. They should only get better from here and these guys have a lot in front of them.

Rocks like:
- Maroon 5 – ‘Songs About Jane’
- The Script – ‘The Script’
- Augustana – ‘All the Stars and Boulevards’
Email Post