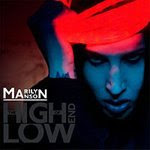 By this point in the much storied career of Marilyn Manson, we should all get the gist of his whole mantra; scary pictures, outlandish lyrical content, spooky imagery, and spiteful, profane words. What should also be known is that this man has yet to release a truly bad album, an arguable point, yes, but just think about it. If you’re familiar with Manson’s rather staunch body of work, you’d agree that while his latter works may not stand up to his former, they still aren’t bad records. Much is the case of his latest, and seventh, record, ‘The High End of Low.’

Let’s face it, Marilyn Manson isn’t exactly a spring chicken (turned 40 this year), and it is starting to show. He may still look somewhat frightening, but over the years people worldwide have had the chance to get accustomed to his antics. It may not be a full on coming of age, but you have to admit that Manson has become quite tame as of late.

‘The High End of Low’ is unnecessarily long at 15 tracks, leading some of the record to become tiresome and repetitive. That isn’t the case for the entire work however, just some portions, including the nine minute ‘I Want to Kill You like They Do in the Movies’ and the droning ‘Into the Fire.’

This record does find Manson again evolving musically, delving further into the depths of blues rock tinged ballads (‘Four Rusted Horses’), electronic drenched efforts (‘Wow’), somber and downtrodden spookiness we have all come to know and love (or fear) (‘Wight Spider’) and ‘The High End of Low’ even finds Manson sounding somewhat real and heartfelt (‘Running to the Edge of the World,’ ‘Unkillable Monster’). But it is Manson’s usual soiree’s into metal and hard rock (‘Pretty As a ($),’ ‘Arma...geddon,’ ‘We’re From America’) that make this record his best work since the end of the millennium with 1998’s ‘Mechanical Animals’ and 2000’s ‘Holy Wood (In the Shadow of the Valley of Death).’

It is also hard to ignore the return of famed Manson guitarist Twiggy Ramirez, who returned to the band for this album following a six year hiatus. His talents add a certain breath of life to ‘The High End of Low,’ giving it much needed breadth and a down-tuned vibrato that the bands previous release, 2007’s bland ‘Eat Me, Drink Me’ lacked.

Manson hasn’t really released an album of note in almost ten years, but with ‘The High End of Low,’ that all changes. He has yet again found a way to reinvent himself musically, this time around sounding almost human, yet retaining his usual air of mystique and other worldly form. While he may not be someone to be scared of anymore, he can still make killer music.

Grade: A
Listen to: ‘Running to the Edge of the World,’ ‘Arma…geddon’
Email Post