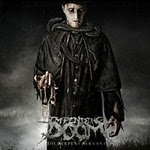 It’s easy to see why Facedown Records owner and proprietor Jason Dunn said that Impending Doom’s ‘The Serpent Servant’ was the bands biggest release to date, as the record charted at 144 on the ‘Billboard Top 200’ and number 3 on the ‘Heatseekers’ chart. It sold 4,300 copies in its first week alone. Hell, the band were even able to recruit As I Lay Dying frontman Tim Lambesis to help produce. So, yeah, it’s easily the labels most hyped release since Comeback Kid’s ‘Turn It Around.’

‘The Serpents Servant’ is a fairly cut and dry record. It is an effort full of the usual death metal (‘Gorship’ as the band puts it) flair, complete with the same old plot twists, turns and touches. You can pretty much expect the norm – swirling, intense drum work combined with grindingly shredful guitars, which in turn is layered atop guttural, unrelenting vocals. Breakdowns are also around every corner, so be ready. At least with this record though, you can actually tell one song from another, which immediately scores the record bonus points.

This disc isn’t without its highlights, like the crushingly wonderful ‘Revival: America’ and the striking grindcore riffage of ‘When I Speak’ and ‘Beginnings.’

Sure, Impending Doom are Christians, but at least with ‘The Serpent Servant,’ they aren’t all preachy and such on their soapbox. While it isn’t quite up to par with Living Sacrifice’s Christian metal, it’s pretty close.
Email Post