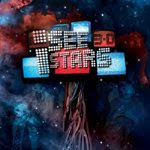 I See Stars’ ‘3D’ is really a record that touches on all sides of the musical spectrum, one that is all over the place honestly. Unfortunately, the bands ultra unique blend of post-hardcore, metal and synth-y powerpop hurts them as much as it helps, as in the end the record itself doesn’t have a true identifiable identity.

There’s no denying these Warren, MI boys have a knack for variety. They obviously went into making ‘3D’ with the idea that they didn’t want to be boring or sound like anyone else. ‘3D’ is part Driver Side Impact, part Kaddisfly and even part Fall of Troy, but with such an interesting blend of influences, one should be ready to be in for one hell of a ride.

When the band breaks it down in their unique part electronica, part synth, part hardcore, way, it seems as if one of two things is happening – either all hell is breaking loose, or the band just managed to confuse the hell out of you. This might be one of the very, very few bands that could fit on Top 40 pop radio (‘Where the Sidewalk Ends’) and still find a comfortable home on the ‘Artery Foundation’ tour alongside Emarosa and In Fear and Faith (‘Project Wakeup’). Hell, they might even work on some daring nightclub dance floors (‘Sing This!’ w/Bizzy Bone). With ‘3D,’ some stuff works and some stuff doesn’t.

If you want something different, here it is.
Email Post