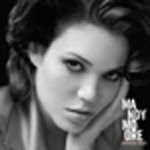 Ok Mandy Moore, we get it, you’re trying to be serious and you’re trying to grow up. With her latest album, ironically titled ‘Amanda Leigh,’ the bubble gum pop singer is not only using her real name as the title but also a serious, pseudo-mature looking picture of herself as the artwork. Judging by the collection of adult contemporary songs housed on this record, the singer is trying to forget the past move on and thusly shed the shackles of her tweener pop stained musical past.

Moore even had a hand in penning all of the tracks on ‘Amanda Leigh,’ further showcasing her skills in an attempt to prove that she can be the next crossover sensation, ala Shania Twain. Jessica Simpson could learn from what Moore is doing and not a slight towards Simpson because she chose to go from pop to country and not the path that Moore is taking, but still. Moore is certainly taking steps in the right direction with ‘Amanda Leigh’ in an attempt to revive her musical career after consistent failures in the acting world. Hey, if Jennifer Lopez did it and to some extent Simpson did it, why not Mandy Moore?

The identity shift began years ago with 2007’s ‘Wild Hope,’ an album that saw Moore receive more songwriting duties in order to craft her current sound, and it definitely continues with ‘Amanda Leigh.’ One thing that has always been a fact is that Moore is a gifted vocalist, something that thankfully hasn’t changed. It doesn’t take long into this record to realize that Moore isn’t the same person we have all known in the past. She is quickly becoming a gifted Top 40 pop singer/songwriter, as evidenced by any number of songs on this record. Whether you are looking for Moore in all of her traditional vocal glory (‘Merrimack River,’ ‘Bug’), up-tempo, modern pop rock numbers (‘Fern Dell,’ ‘I Could Break Your Heart Any Day of the Week,’ Pocket Philosopher’) or wonderfully effervescent, yet sullenly bleak ballads (‘Songs About Home,’ ‘Everblue’), ironically enough you will find it on ‘Amanda Leigh.’

Unfortunately for Moore, people aren’t usually so quick to forget the past but those same people are also eager to embrace the future, which is something she’s shooting for. While we can’t immediately forget the musical atrocities, gimmicks and things Moore’s done wrong in the past, we can embrace the things she is finally doing right in the present. It starts with ‘Amanda Leigh,’ a stirring success in its own right, but it will be interesting to hear where Moore goes next.

Grade: B
Listen to: ‘I Could Break your Heart Any Day of the Week’
Email Post