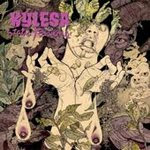 The band takes their name from ‘kilesa mara,’ which is derived from Buddhist teachings meaning altered states of delusion, something Kylesa adhere pretty well to musically. With their latest, ‘Static Tensions,’ their fourth proper release and second through new home Prosthetic Records, the Savannah, GA post metal quintet have successfully released their most triumphant work as a band, and might have even added more expansiveness to their sound.

The band took their time with ‘Static Tensions,’ and it clearly shows. It had been three years since the group released an LP, since 2006’s ‘Time Will Fuse Its Worth,’ but they made up for that lost time with this new opus of theirs. While the new records’ penultimate sound comes off as gloom tinged stoner sludge, it has more of a post-metal feel, ala Isis or Neuorsis, but it is not without other certain diverse elements, like hardcore punk, psychedelia, and various forms of metal (technical, speed).

Through the use of not only two percussionists but also three starkly different vocalists, ‘Static Tensions’ finds the band at their most complex sounding and unrestrained best. ‘Static Tensions’ duel guitar attack creates a vast mountain region worth of riffs, adding a piece to the substantive slab that is the albums sonic presence. This is obviously a layered effort, rich in its own complexities, full of songs that will have every stoner metal fans jumping for joy (‘Unknown Awareness,’ ‘Running Red’), songs that prove the band is aware of the entire post-rock movement (‘Hollow Server’) and proof that they are more diverse this time around, showcasing the interplay between their guitars and drumming (‘Said and Done’).

‘Static Tensions’ is the band finest body of work yet, and by the sounds of things, they are primed to only get better. Kylesa has released a record that might even be able to rival Isis’ ‘Wavering Radiant’ post-metal record of 2009.