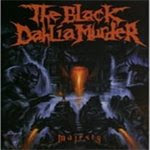 Even though Metal Blade hit the ball out of the park with the recently released ‘This Is Who We Are’ by As I Lay Dying, they are back and ready to do it again, this time with ‘Majesty,’ the debut DVD effort from fellow Metal Blade artists the Black Dahlia Murder.

Much like the afore mentioned AILD release, ‘Majesty’ is broken up into three parts, this time spanning two discs as opposed to three. Disc One will introduce you to the band if you don’t already know them and even if you do, this disc, containing various tour antics, interviews and live footage, will let into their world, literally. You will get to know them intimately, and will find out all you ever wanted to know, including maybe even some stuff you might have not wanted to know. With ‘Majesty,’ TBDM allows you into their private world, on and off the bus so to speak. You’ll come away from this DVD knowing the band intimately, and that really isn’t much of an exaggeration.

Just read the DVD’s description on the back cover in order to realize the level of shenanigans on ‘Majesty,’ ‘from the depths of human stupidity comes the first ever look into the relentless touring lifestyle of thrashing death anti-heroes the Black Dahlia Murder.’ By no means is that laughable description a stretch, seriously.

The second disc of the DVD is the meat and potatoes of the set. Over ten live performances from around the world start off the disc, including performances on the Summer Slaughter Tour and from show supporting Children of Bodom. Also you will get all seven of the bands’ music videos, including ‘Everything Went Black’ and ‘Funeral Thirst.’

Disc one sets them up and disc two knocks them down, it is as simple as that. ‘Majesty’ is truly all it is cracked up to be, and then some.