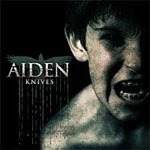 Apparently frontman Wil Francis’ time spent with his side project William Control made him more focused and that much more pissed, if that’s possible. For those that thought that Francis’ time spent on his solo career would alter the sound of Aiden in any way, think again. Aiden is back, and are just as steamed and fired up as they were when they left us on 2007’s ‘Conviction.’
With their latest release, ‘Knives,’ the band claim that this is Aiden like you have never heard them before, and most of that sentiment is true. This is a record that finds Aiden at their rawest yet, a pure sound that solidifies this record as their best yet. It also sounds like a record Francis would record (it was recorded at his home studio, Sleepy Hollow, in Seattle).For the most part, it is the same type of noise that you have come to know and revere with this band, just this time it has a lot more attitude.

‘Knives’ is pure punk rock chaos; fast, aggressive, spiteful and very vengeful. Whether the band is spending time expanding their craft with eerie voice samples reminiscent of early From Autumn to Ashes (‘Declaration,’ ‘Portrait’), standing defiant against organized religion (‘Crusifiction’) or just plain bitching, or venting if you want to call it that (‘The Asylum’), ‘Knives’ has it all.

The album is raucous in both sound and spirit; it is a true horror punk record is every aspect. The guitars are hyperactive, the drumming is fast and furious and both Francis’ voice and lyrics are exactly what you want them to be –hate-filled.

A knock on the album is that it is short at ten tracks, but it also plays very fast as does every previous release (none longer than 45 minutes). But if the only con of your album is its length, then there is a good chance you are doing a lot of things right, which Aiden is with ‘Knives.’

Rocks like:
- I Am Ghost – ‘We Are Always Searching’
- Love Equals Death – ‘Nightmerica’
- The Misfits – ‘Walk Among Us’
Email Post