It’s Almost Midnight, Do You Know Where Your Children Are: A Conversation with After Midnight Project 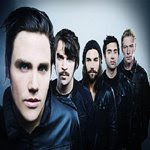 It’s Almost Midnight, Do You Know Where Your Children Are: A Conversation with After Midnight Project
www.myspace.com/aftermidnightproject

They are signed to Universal Records, are playing select Warped Tour dates this summer, will return each and every phone call they get through their MySpace page and have a new record dropping in a few months, yet, chances are you have never heard of them. Their name is After Midnight Project and they are a band you need to listen to.

Their new record is entitled ‘Let’s Build Something to Break’ and will hit streets through Universal July 14. They are bunch of guys who like to have fun and who like to make things interesting, especially their live shows. They are bringing the hardcore visual aspect back to the live arena, employing the use of such mediums on stage as synching video footage with their music or using TV heads on stage while they play. They will do whatever it takes to make sure fans and well wishers leave shows happy and excited, and thoroughly entertained.

Their record doesn’t come out for a little while now, but I had the chance to catch up with the band following the wrap of ‘Let’s Build Something to Break,’ to find out hoe the recording process of the record was, what fans can expect from that same record as well as their live and just how the band describes their music themselves.

Get eXposed: To begin, how would you describe your music to someone who has yet to hear it?
After Midnight Project: I guess we can start by saying Alternative Rock, but I think it gets deep. There are a lot of layers. There are heavy elements of Deftones, Nine inch Nails, Rage Against the Machine – moments of Muse and Incubus, and some Smashing Pumpkins. The songs take you on a ride where you can just sit back and listen to all the layers on your headphones then come to the show and mosh, jump, crowd surf. It covers all the bases.

GE: How is touring right now for you guys? How has it been going?
AMP: So far it’s been great. We just got off dates with Boys Like Girls, Red Jumpsuit Apparatus and Secondhand Serenade. The shows were epic. We made a lot of new fans and friends and we stayed at our merch booth until we were kicked out of the venue. It’s the most fun time in our career thus far.

GE: How has the fan reaction been?
AMP: The reaction overall has been great! It is however oftentimes up to promoters to put together shows and tour packages that make sense, for example we have played hardcore shows and even some electro/techno shows in which we didn’t necessarily cater to the entire crowd, but we always give it our all no matter what. Every show we give the crowd everything we have because we want to feel the same from them. And the crowd usually never disappoints us!

GE: For those of us who have not seen you live yet, tell me about an AMP live show.
AMP: It’s just fun! We put every single ounce of energy we have into the show and the fans respond. We have kids crowd surfing, jumping, dancing, singing – it’s a really honest and entertaining show. We love incorporating visuals into the show, whether it is video footage synched with the music, TV heads on stage, etc. We want fans to leave saying, “whoa, that was intense”.

GE: What the status of your new record? Where are you with recording it, and if it’s done, when can we expect it out?
AMP: We just finished recording our first full-length album entitled ‘Let’s Build Something to Break’ produced by John Feldmann and mixed by Tom Lord Alge. Spencer and I produced two tracks ‘Scream For You’ and ‘Come On, Come, On.’ We couldn’t be happier with the end result! The album is in stores everywhere July 14th on Universal Motown Records.

GE: Tell me about the recording process of the new material.
AMP: So much fun. John is crazy! So spontaneous. Whether it’s recording the sound of tearing a piece of paper, or shattering glass, he just goes for it and he knows that we can use it somehow. John knows what works and what doesn’t work. He is one the easiest people to get along with too. His engineers Matt Appleton and Kyle Moorman are also super fun to work with and incredible at what they do. They all really brought the best out of us! Towards the end of the record we took a trip to San Simian which is this awesome beach in Northern Cali. We recorded vocals for ‘Gone Too Long’ on the beach at 2am on a rock with waves crashing on both sides. We ate great food and just had the time of our lives.

GE: Tell me what fans can expect from your new album.
AMP: Expect After Midnight Project 2.0. We took the songs and production to the next level. Everything is bigger and more magical. Every ounce of creativity and energy was poured into the recording process. Overall we are really excited about the album and we are confident our fans will love it too.

GE: What influenced the writing of this record?
AMP: I’ve been writing this album for over five years a lot has happened; girlfriends, death, war, good friends, bad friends, economic catastrophe, etc. Everything I see I write about, sometimes it sucks, sometimes it’s cool.

GE: What can we expect from you guys the rest of the year?
AMP: Tour Tour Tour, Interviews, Tour, Party, Tour, Tour and little more tour.

Make sure you take some time and get yourself better acquainted with these guys, over at www.myspace.com/aftermidnightproject.
Email Post