Finally, the Crisis is ‘Safe and Sound:’ A Conversation with Andy Wambach of Crisis in Hollywood 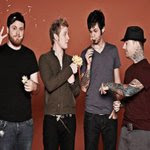 Finally, the Crisis is ‘Safe and Sound:’ A Conversation with Andy Wambach of Crisis in Hollywood
www.myspace.com/crisisinhollywood

With their latest effort, ‘Safe and Sound,’ in stores everywhere right now, Crisis in Hollywood are doing everything they can to become your new favorite band. No, they aren’t a simple scene castoff, they are something more.

They went out and procured the services of Bayside bassist Anthony Raneri to handle the producing duties and man, it shows. The band sounds polished, not over-produced and ready to take on more. They seem determined to gain fans the old fashioned way – by touring the country over and over again. Crisis in Hollywood want to ascend to that next level and with ‘Safe and Sound,’ they sound ready to do so.

With the new disc already gracing store shelves, I was able to catch up with Crisis in Hollywood’s percussionist, Andy Wambach in order to get a little more insight into what went into making ‘Safe and Sound,’ how they were able to get Raneri on board with the project and just where and when we can expect to see the boys in the near future.

Get eXposed: Let’s start with touring. Tell me how that has gone so far.
Andy Wambach: Touring has been great! We were really lucky this time to go out with a great band, our label mates, Victims of Circumstance. We've done 14 shows in the last two weeks, and everyone has been a blast, we all live to tour, so we make the best out of any situation we're presented with on the road. We have to give a shout out to Knoxville, Tennessee for keeping the local scene alive and treating bands right.

GE: How has the fans reaction to you guys been?
Wambach: The reaction has been incredible, we have had a mix of crowds on this tour, but everyone has been really receptive, which is all a band 1200 miles from home can ask for. We brought some brand new merch on this tour, and luckily people have been picking some up at most of the shows. Whether we're mobbed by a crowd or playing for a handful of kids we have been able to make new fans in every city with most nights ending in lengthy conversations with new friends.

GE: Tell me about the recording process of ‘Safe and Sound.’ How did that all go?
Wambach: We basically moved into the studio for five weeks to do the album. We ended up doing two weeks of pre-production, two weeks of tracking, and a week of mixing. We couldn't be happier with the experience. On our last album, ‘Between the Devil and the Deep Blue Sea,’ we were a little rushed to get it done, and definitely appreciated the extra time we had on ‘Safe and Sound’. Our record label, Financial Records, owns their own studio, so luckily we were able to crash on the floor for the five weeks we were recording. That really gave us time to fine tune the songs because we had access to the studio 24 hours a day, so we would be writing and making changes to songs at three or four in the morning sometimes. That experience led us to writing what became the final track on the album, which is really just about hanging with friends and having a good time.

GE: How did you go about getting Anthony Raneri to produce?
Wambach: Long story short, we were working with a guy out in LA, a consultant for the label, and he mentioned Anthony's name as someone who might really dig our sound. He got a copy of our first album to Anthony and shortly after we got the call to do a sophomore album with Anthony producing. Honestly, we weren't fully prepared to do a new album, as we had recently released our first one. We obviously couldn't turn down the chance to work with Anthony, so we got to work right away writing new songs for what would become ‘Safe and Sound.’ We got to the studio with about 17 songs, and trimmed the fat to get to the 12 track finished product.

GE: What did he bring to the table?
Wambach: We are all huge Bayside fans, and most Bayside fans share the opinion that Anthony knows how to write a great pop song. We have always been completely against the idea of co-writing with other people, but the experience with Anthony wasn't like that at all. We had all of the songs completely written when we got to the studio, but Anthony was able to take the written songs and add his years of experience to develop them. He has a great ear for structure and arrangement and he really helped us organize our songs and ideas.

GE: What inspired you to write this record?
Wambach: Like we said, it was kind of unexpected, but luckily we are able to get inspired pretty quickly. The thought of being able to do another album was exciting because we are always writing. We knew we wanted to maintain our sound from the first album, but we also wanted to show some different sides of the band. We always have a lot of ideas, but this lit a fire under our ass to finish them up. What's funny is that we are already writing for the next album, we figure why pass up what could be a great song because we don't "need" to write right now.

GE: What can fans who may have not heard of you before expect from this album?
Wambach: I think fans can expect a solid mix of pop hooks and punk rock tunes. We all love great hooks and catchy melodies, so we try to incorporate those ideas into all of our songs. Being the diverse music fans we are we also try to cater to multiple genres musically, but end up pulling it all together to make catch punk/pop songs.

GE: Now that it is done and out, how do you think it turned out?
Wambach: We're really happy with it. We have been playing some of the new songs at our shows and the reaction has been great. I think old Crisis fans will dig it like they did the first album, but I also think new fans will be generated thanks to the diversity. We are really proud of the album and the entire process, and we hope that's reflected when people listen to it.

GE: What’s in store for CIH the rest of 2009?
Wambach: Tour, tour, tour! We are planning on spending as much time as possible on the road this year, promoting the album and making new fans. We are all at home on the road, so it seems like the right thing to do. We are planning to head out West and Midwest after this East Coast tour, and then back up to the Northeast. There are a few things on the horizon we can't talk about quite yet, but we will be letting people know the second we know!

You can check out more on CIH over at www.myspace.com/crisisinhollywood.
Email Post