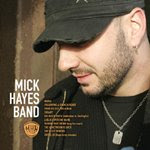 Mick Hayes is the epitome of a traveling troubadour, having lived all over this great country, but he spent most of his time growing up here in the Southtowns. He has been busy trying to make a name for himself, playing everywhere from Atlanta and Nashville to Los Angeles, and everywhere in between, including a stop in San Antonio with a tryout for American Idol.

He is good at what he does, and showcases that not only with his band, aptly titled the Mick Hayes Band, but with their recently released self titled effort. The music is a concurrent, fluid blend of blues, jazz, pop, and rock that comes off sounding like anything from Stevie Ray Vaughn to George Thorogood. Obviously the guitars are good, think soaring riffs that weave through relatable verses and easily sing-able hooks.

Most of this record is straight forward and guitar driven, full of ultra feel-good vibrations and songs about women and boozing, but it is hard to think how this record translates to a venue outside of a beer tent or bar. And although it doesn’t present itself as much more than mere, atypical bar band fodder, it is very evident that Hayes is the main cog in the band. He truly is the driving force behind the music. His voice is strong, sultry and altogether honest.

While tracks like ‘Poor Excuse for a Man’ offer a nice good ol’ boy rousing feel complete with gang vocals, a sincerely good guitar solo and excellent piano work, and ‘The Honeymoon Is Over’ has a classic 70’s vibe to it with a classic hand clapping chorus, most of the record is efficient good times blues. The album shines brightest during its closer, ‘Untitled (Hope in My Dreams).’ This song finds Hayes songwriting at its crispest and offers a beautiful example of what he can do vocally.

One thing is for sure, these guys can surely wail. Hayes is one of the guitar world’s best kept secrets and his fellow musicians, bassist David Frost and drummer Todd Mazurek are definitely not far behind talent-wise. Their self titled effort is a beefy and seriously talented record, but it’s just hard to see where it makes a significant impact.

If you like really good guitar work shown throughout a seemingly endless barrage of solos, pick this record up.
Email Post