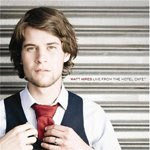 ‘Live from the Hotel Café’ is a four track, six-string vessel, a pure of heart charge led by singer/songwriter newbie Matt Hires. It is emotional acoustic music that tells a story that isn’t always depressing like more of its kind, but mostly hopeful in nature.

Hires sweet, understated voice often overshadows his quality guitar work, but it is seemingly hardly noticed. ‘Live from the Hotel Café’ is a wonderful piece of Americana with a subtle Midwest feel to it that is an amalgam of equal parts Jack Johnson and John Mayer with touches of Matt Costa and Mat Kearney. The album plays its four tracks quick at a shade over 15 minutes, but it succeeds in leaving a lasting effect on the listener.

The hooks are prevalent, especially during the heart-on-sleeve, honest ‘Tangled Web,’ even though the whistling in tune at the end of the song might be better than any hook. Yes, you will want to sing along. It is hard to imagine at the young age of just 22 that Hires voice could sound this mature, this earnest and polished, but it’s those qualities that make his music so unbelievably endearing.

Someone should call Zack Braff and tell him the soundtrack to his next alt-indie romantic dramady is here, and his name is Matt Hires.