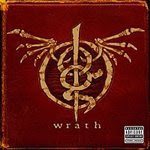 Remember how good you thought Lamb of God was before? Well, they are even better now. First though, a warning. Listening to ‘Wrath,’ the bands the bands sixth, and latest, record, while driving will more than likely cause multiple speeding tickets and random face punching.

This thing is an opus, a masterful example of why Lamb of God is at the forefront of American metal. This is clearly the best metal record of the year thus far, and it is going to be the record in beat in 2009.

It takes one track off of ‘Wrath,’ the impressive concrete slab that is ‘In Your Words,’ to realize that this is a landmark record for the Richmond, Virginia products. This record is truly a sonic beast. From fevered tempos to crashing waves of sound, ‘Wrath’ is a record that manages to touch all bases. It is full of strenuous guitar thunderclaps, all-over-the-board, cement thick drum work, spiteful, pissed off vocals and breakdowns that will send you running for the pit. ‘Wrath’ is relentless and unapologetic. Really, everything about this record screams brilliant, and it is hard to say enough good things about it.

Randy Blythe’s vocals aren’t as consistently guttural and throaty as they have been in time past, and that isn’t a bad thing, in fact, it’s just the opposite. It adds a deeper element to the bands overall aesthetic.

This album is very ‘Vulgar Display of Power’-esque, and it might be the closest thing to a new Pantera record we might ever come.

You can take a few things away from ‘Wrath.’ One, as long as Lamb of God is making heavy music, American metal is alive and well, and two, this band is really f***ing good.