Have You Heard? Siege AD 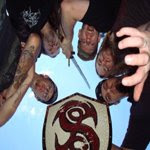 Have You Heard? Siege AD
www.myspace.com/siege2008ad

With names such as the Warhound, the Rath, Cannibal, Devilmaker and Lord Thundarr, you would expect a band to be one of two things. Either they are simple comic relief, or they take themselves pretty serious. In the case of Buffalo, New York death metal merchants Siege AD, the latter applies.

Maybe it is that stern take on themselves that has led them to their success thus far, including their debut album ‘Infernal Eclipse’ and being able to share the stage with such prominent heavy acts as Misery Signals, Hemlock, Alabama Thunderpussy, Vital Remians, Full Blown Chaos and even the mighty Obituary.

“It was after the show with Obituary, Hemlock, Full Blown Chaos and Alabama Thunderpussy that Siege AD really became a solid machine,” lead singer the Warhound says. “Then throughout 2007 and into 2008 we released two demos and continued to play shows, which led us to open for more nationals such as Vital Remains and Monstrosity.”

While it is hard to create any sort of separation in the death metal scene, Siege AD is doing their best to carve out a niche for themselves. Their music is uncompromising and thoroughly relentless, led by the Warhound’s grinding, gut-wrenching vocals. Add to that crushing, explosive guitars and pulverizing blast beat drumming, and you have Siege AD’s complete sonic aesthetic.

“To describe our music, well quite frankly, it is very unique by today’s standards,” he adds. “We roll all styles together to create an engine of pure primal-ness. Just take Amon Amarth, slap it into Metallica, then add some Black Label society, gargle some salt and glass crushed by a shield, and you get Siege A.D.”

While that might be a tad bit confusing to imagine and a little hard to swallow (pun intended), the band went on to discuss how they create their sound.

“When we start the writing process, the boys work out all the guitar parts first then travel to the finished song with no vocals, so a lot of time can be taken for the vocals and lyrics if need be. We have a very good natural understanding of music theory, so most of the lyrics fit very easy. For the most part we create very quickly.”

The band is currently working towards recording their second full length, entitled ‘Legends of the Oathsworn,” which should see a winter 2009 release.
Email Post