Have You Heard? Always April 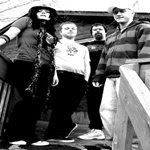 Have You Heard? Always April
www.myspace.com/alwaysaprilmusic

As a self professed cross between Sonic Youth, PJ Harvey, the Pixies, Fugazi and Incubus, Arkansas’ Always April certainly have a shroud of mystery around them. Their glam tinged fuzz rock has a special sound to it, something that is almost impossible to pinpoint.

Perhaps it has something to do with the way the band just puzzlingly formed.

“We have all been playing music in different bands most of our lives and all have come from different big cities around the nation to Salem, Arkansas for completely different reasons,” the band states. “We met by sheer coincidence within a two week span and realized that we could make a good band, and the rest is history.”

For some reason, almost everything about this band has at least some type of cloud surrounding it, but that might have more to do with the bands members than anything else. Seriously though, even the way they write their music.

“We write in secret code about our experiences and beliefs about our surroundings. We try to write off of everyone’s input and ideas. We try to work each others’ ideas and words and music parts into coherent pieces of music and argue a lot in the process.”

Much like those bands they liken themselves to; Always April’s music is also drenched in heavy guitar effects and lead singer Charmaine’s dreary, yet powerful and silky voice.

As for what the band has planned for the rest of the year, it is better off letting them explain, or try to for that matter.

“We are working with a brilliant producer named Doug DeForest on our first album called ‘Kid Gloves’ (out now) and are turning it into a formidable little beastie. Then we will send it to some people who know some other people who can do something with it to help us go somewhere. Is that vague enough?”